Taking advantage of a dry day on April 21, Ste. Genevieve County’s road and bridge department paved the remaining 1.2 miles of Magnolia Hollow Road.
Due to expected shortfalls in gas and sales tax revenue from the COVID-19 shutdown, the County Commission expects this to be the only paving job of 2020. 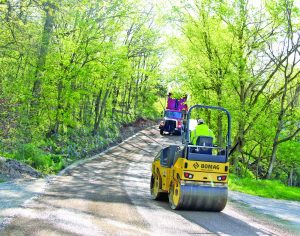 Due to the curvy, hilly nature of the road, county crews used dump trucks to spread rock April 21 when they paved the remaining 1.2 miles of Magnolia Hollow Road. (Photo by MARK EVANS/Herald staff)

It was done with chip-and-seal paving, a mixture of oil and small rock. The county’s chipper, bought for chip and seal roads, was not used due to the hilly, curvy nature of the road.
“About 80 percent of it was straight up hill, with a curve,” Presiding Commissioner Garry Nelson said, calling it a “safety decision” to spread the rock with dump trucks.
The road had been selected as the No. 1 priority because some funding should be available, since it leads to Magnolia Hollow Conservation Area, managed by the Missouri Department of Conservation. Originally, a May 1 deadline was required to qualify for possible funding. It was later moved back to June 1.
Nelson praised road and bridge foreman Scott Schmieder and his crew during last Thursday’s meeting.
“The whole process went real smooth,” he said. “Everybody knew his job and did it well.”