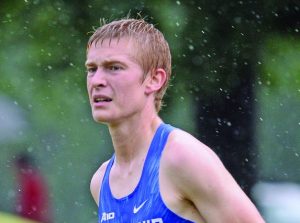 The coronavirus (COVID-19) pandemic has either canceled or caused the postponement of sporting events at just about all levels all over the world.
Student-athletes from Ste. Genevieve involved in college fall sports were able to complete their seasons, while those in winter or spring sports faced the possibility of their seasons being cut short by the pandemic.
Among the local athletes competing at the college level:
Former Ste. Genevieve High School distance runner Ben Naeger  spent the first two years of college at St. Louis University, but transferred to Belmont University in Nashville, Tennessee, this school year.
In his first season with Belmont’s cross country team, he competed in five events, which included a win at the Belmont Opener with a time of 15 minutes 19.4 seconds. He took 26th at the Commodore Classic and earned all-Ohio Valley Conference first-team honors after placing sixth in the OVC Championship. He finished 40th in the NCAA South Regional meet.
Ste. Genevieve’s Nathaniel Ogden and Schuyler Ogden finished their junior seasons of cross country at William Woods University.
Nathaniel Ogden took fifth in the AMC Championships, earned Academic All-AMC honors, made the USTFCCCA all-academic Team and was a NAIA National Championship qualifier.

Nathaniel Ogden fell and was injured in the national championship race and couldn’t continue the race.
Schuyler Ogden took fourth place in the AMC Championships and qualified for the national race, where he finished 173rd. He also made the USTFCCCA all-academic team and was named academic all-AMC. As a team, William Woods finished 31st in the NAIA national championships.
Ste. Genevieve graduate Avery Reed had 78 kills, 45 digs, one solo block and 21 assist blocks during her sophomore season with Missouri Science & Technology’s volleyball program. She had a season-high 13 kills against Southwest Baptist on November 1, and she added three kills against Lindenwood on November 16 to help the Miners clinch their first trip to the GLVC Tournament since 2015. The season ended in the first round of the tournament against No. 1 Rockhurst, but Missouri S&T finished the season 8-7 in conference play and 21-10 overall.
Valle graduate Sydni Basler finished her sophomore season of volleyball at Mineral Area College. She had 247 digs, eight solo blocks, nine assist blocks and six kills to go with 18 aces. The Cardinals made it to the national tournament for three straight seasons, but that streak was snapped last fall as they finished the season 1-3 in Region XVI play and 16-11 overall.
Basler also saw a little playing time during basketball season after two players left the program. Stats were unavailable for Basler, who currently holds the career scoring record at Valle, while the basketball team finished 6-4 in Region XVI play and 19-10 overall in Gary Koch’s 14th and final season at the helm.
Koch, who was a head coach for both Ste. Genevieve and Valle Catholic during his career, was recently named as part of the MBCA Hall of Fame class.
Basler recently announced she will continue her collegiate volleyball career at Central Methodist University after graduation from Mineral Area College.
Ste. Genevieve graduate Jennifer Humbolt wrapped up her freshman season for Illinois College’s volleyball team. She came up with 75 digs and one kill in 14 matches and 48 sets played. Illinois College reached the Midwest Conference Tournament semifinals and finished the season 7-2 in conference play and 21-8 overall.
Ste. Genevieve’s Joshua Schmidt completed his freshman year of wrestling at Hannibal-LaGrange. Individual results were unavailable as of press time. The Trojans took fourth place out of nine teams in the NAIA American Midwest Conference Regional tournament to end the season.
Several spring athletes started their seasons, but due to COVID-19 their seasons were cut short. Some of those athletes from the local schools include Tyler and Kellen Blum (Illinois College baseball), Chad Donze (Three Rivers baseball), Derek Morganthaler and Brady Boyer (both with St. Charles Community College baseball), Isabella Zerwig (Webster University track), Drew Toombs (Mineral Area College baseball), and Jesse Pinkley (Central Methodist track).
Pinkley competed in the NAIA Indoor Track and Field Championship. He finished 14th in pole vault with a height of 4.55 meters. The outdoor season was scheduled to start on March 21 with the CMU Open, but that event and the rest of the schedule has been canceled.
In Tyler Blum’s 26 at-bats he recorded four hits, a double, a home run, three RBIs, four runs scored and a walk. Kellen Blum had a hit in five at-bats as he had an RBI and a run scored to go with two walks. Illinois College went 2-7 and competed in the Russ Matt Central Florida Baseball Invitational before the rest of the season was cut short.