COVID-19 has caused another cancellation for an annual event in Ste. Genevieve in 2020.
The 23rd annual French Heritage Festival, scheduled for June 13, has been canceled.
Headlining musician Dennis Stroughmatt, who has appeared annually at the event in recent years, posted on Facebook on Saturday that the event had been canceled. The decision, though, was not officially made until Sunday night. 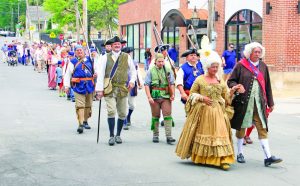 The French Festival became the latest annual event to be canceled by the coronavirus, which also forced cancellations of Ecole du Soldat and the Garden Walk.

Event coordinator Cathy Grusling who said she was unaware of Stroughmatt’s post, conferred with her co-coordinator, Sandra Cabot, and with others — including Stroughmatt — and officially announced Sunday night that the event was “postponed until June 12-13, 2021.”
Grusling said after conversations with Cabot and with members of the the Foundation for Restoration of Ste. Genevieve, the decision was made to cancel this year’s event.
Although Governor Mike Parson has expressed a desire to see businesses open in May, many healthcare professionals fear the pandemic posing an eminent danger deeper into the summer.
“Dennis told us that everything he has been playing this summer has been canceled, and he believed we should postpone it until 2021 as well,” Grusling said. “So, that’s what we are doing. We’re not even going to postpone it [until later this year]. He is our headliner, so without him as our draw, we are going to postpone it until June 12-13, 2021.”