Last Friday, Chris Crocker of the Missouri Department of Transportation and Jeremy Manning of Smith and Company Engineering accompanied Presiding Commissioner Garry Nelson to inspect the aging Franklin Bridge on Franklin Road on the outskirts of St. Mary. 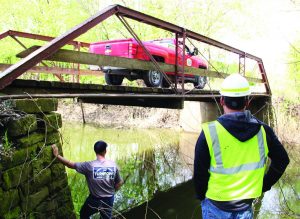 Jeremy Manning of Smith and Company Engineering and Chris Crocker of the Missouri Department of Transportation [foreground] watched as county road and bridge foreman Scott Schmieder drove a truck back and forth across the aging Franklin Bridge in St. Mary last Friday. (Photo by MARK EVANS/Herald staff)

The bridge, apparently dating back to the 1910s or so, currently has a three-ton weight limit, but has become a concern for the commissioners. It has been under water during recent floods, and the wood flooring is rotting.
Manning and Crocker found the structure itself to be in reasonably sound shape, though. One pin will need to be replaced. Manning said that, considering the improved strength of modern steel, a much smaller pin can probably be used to replace it.
The commission is also strongly considering removing the wooden planking for good and installing steel plates instead. Manning and Crocker agreed that this would be a feasible fix for the bridge, since its deck is frequently under water.