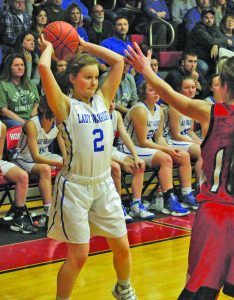 Mallory Weiler had a successful basketball career with Valle, which included helping the Warriors claim their first district championship in 20 years.
When the season came to a close for all teams, she earned one more prestigious honor.
The senior basketball and softball athlete recently earned academic all-state honors for the past basketball season.
According to Valle coach Davis Grigaitis, in order to receive the honor from the basketball season, a player has to be nominated by their coach, who must be a member of the of the Missouri Basketball Coaches Association. From there, a student-athlete must be a senior on a team in good standing, possess outstanding moral character, a grade-point average of 3.25 or more out of a possible 4.0, and must have one or more of the following verified minimum scores — a composite ACT score of 27 or better, a composite SAT score of 1920 or better or a PSAT selection index score of 185 or more.
“I was thrilled to hear Mallory had earned academic all-state,” Grigaitis said. “I knew that there was a very good possibility that she would receive that honor, but it was amazing news, and I was super excited to tell her. It is a very special honor. We at Valle Catholic are so proud of her.”
“When I first heard of the possibility of earning the accomplishment, I thought it would be really cool,” Weiler said. “Coach asked me if it was OK to nominate me, and I was all in, but I didn’t realize how cool it actually would be until I got it.”
The achievement became more special when it was discovered that Weiler was the first Valle basketball player to earn academic all-state honors.
“Mallory is certainly an incredible student-athlete,” Grigaitis said. “I was even more proud of her when I found out she was the first in program history to earn that honor. I did some research, and they began honoring academic all-state in 1999, and reviewing the list of honorees there were no other Valle Catholic girls basketball players who received that honor. I think this adds even more to how special this honor truly is and how it is such a tremendous achievement.”