With cooler weather and rain predicted for much of the week, Ste. Genevieve County Presiding Commissioner Garry Nelson urged road and bridge foreman Scott Schmieder to hold off on starting the county’s only paving project of the year last week.
The chip-and-seal paving of Magnolia Hollow Road needs to be done by June 1 in order to be eligible for federal money. 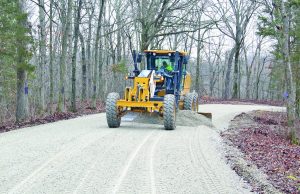 The county had committed to paving it because state funding would likely be available since the road leads to Magnolia Hollow Conservation Area. Originally, there was a May 1 deadline for finishing the project, in order to qualify. However, the Missouri Department of Transportation (MoDOT) later informed the Commission that the deadline for completion had been extended to June 1.
“We’ve got plenty of time,” Nelson told Schmieder at the April 13 County Commission meeting. “We’ll get better weeks than this week.”
The road had been prepped, including the removal of a bluff and the straightening of a dangerous curve, in anticipation of paving.
At last Thursday’s meeting, the road was discussed again, with Nelson encouraging Schmieder to get the job done in one day to avoid any more possible weather delays.
“If it takes a 12-hour day, it takes a 12-hour day,” Nelson said.
They agreed that Tuesday, April 21, was a good target date.