By Robert Mueller
Special to the Herald
There have been a number of times during its history when Ste. Genevieve was impacted by epidemics (localized increase in deaths) or pandemics (illness and death spread over a large number of countries).
During the colonial period, newcomers to the area suffered greatly from malaria with symptoms of fever, headaches, and general malaise. Quinine derived from the bark of the South American cinchona tree was used to reduce the effects of the disease. The local population realized that malaria occurred at certain times of the year but did not know the disease was transmitted by mosquitos. They thought it was caused by vapors coming from standing pools of water.
In 1797, the town’s commandant, Francois Valle, requested the townspeople to drain standing water as the fevers usually started in the early fall when standing water was prevalent.
Yellow fever, another mosquito-borne disease, affected others coming to the region. A major epidemic of Yellow fever occurred at Philadelphia in 1793 caused by infected refugees leaving the Caribbean Islands. 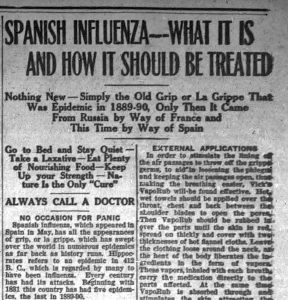 The Herald in November 9, 1918, reported on an inside page about the Spanish flu, which caused at least 30 deaths in Ste. Genevieve County in the last three months of 1918. (Image from Herald archives)

Some of those refugees ended up in Ste. Genevieve.
Smallpox, also known as variola, was another dreaded disease that afflicted many in the mid-Mississippi Valley. It was especially destructive among the Native American population. It has been estimated that 80 to 90 percent of the Native American population was decimated by this disease. Local Ste. Genevieve inhabitants feared those arriving on boats from other areas affected by smallpox. In 1793, the local commandant denied those boats from landing in the town. Even though a vaccine preventing smallpox had been developed in 1770, it was not available in this area until later.
Delassus, commandant of the neighboring New Bourbon District, encouraged Dr. Walter Fenwick to immigrate here from Kentucky, as the region needed a doctor. Fenwick was familiar with the vaccine, and it was offered publicly in May 1802. However, local residents were wary of the suggested vaccine and its possible effect on the labor force needed for the spring planting season. Smallpox continued to be an occasional scourge here as late as the 1910s. Those experiencing this disease were quarantined in their homes to prevent its spread throughout the community.
There have been six cholera pandemics since 1817, but the second pandemic starting in 1829 significantly affected our local area. This bacterial infection was prevalent in Ste. Genevieve in 1833 and became a serious issue in St. Louis during 1849, as 10 percent of the population there died from the disease. Fear of the disease caused local authorities to ban steamboats dropping off sick passengers at Ste. Genevieve river landings and quarantining households with infected persons.
Once, a steamboat did leave a sick person. The local doctor, Lewis Fields Linn, was noted for his treatment of cholera and he went to the landing to bring the sick person back to his house. Frightened citizens threatened to burn his house down. Linn’s wife reminded them that the good doctor had cared for their health for many years. Cholera also resulted in Dr. Linn becoming a U.S. senator. He was appointed to fill the term of Alexander Butler, who had succumbed to cholera. A vaccine was developed in 1896.
The influenza pandemic of 1918, also known as the Spanish flu or la grippe, was caused by the H1N1 virus, and it became the most severe in recent history. Theories abounded that it had not started in Spain but, among other things, preservatives in American bacon and poisonous vapors in the air. About 500 million people, a third of the world’s population, were infected with the virus. Almost 675,000 persons died of the virus in the United States. Persons under 5 years old, 20 to 40 years old and those older than 65 experienced the highest mortality.
The local newspaper reported in December 1918 that 3,145 Missourians died in October of that year. This was equivalent to all the deaths in Missouri just a year earlier. Later that month, the paper reported that the United States had experienced 105,000 in the months of November and December.
Ste. Genevieve was not spared the effects of this deadly virus. During the entire year, Ste. Genevieve County experienced 130 deaths. Of these, the influenza and lobar pneumonia associated with virus, caused 30 deaths. Two occurred in October, and it became more deadly in the next two months as 15 deaths from it occurred in November and nine in December. Just a year earlier, there were only two deaths caused by lobar pneumonia in the county. Over half of these deaths occurred in persons between the age of 20 and 40. The disease abated in early January as there were only two reported influenza related deaths that month and in February 1919.
There were no drugs available to prevent or cure this virus. Most of the efforts to control its spread included isolation, quarantine, personal hygiene, use of disinfectants, and limitations on public gatherings.
The first flu vaccine was developed in 1942. However, strains of the flu frequently mutated necessitating new vaccine development.
An outbreak of H2N2 influenza originated in East Asia between 1957 and 1958. According to the Centers for Disease Control, it caused an estimated 1.1 million deaths worldwide and 116,000 in the United States. Ste. Genevieve did not experience a significantly higher death rate as there were two persons who died during the 1958 flu season due to lobar pneumonia.
In 1968, an Influenza A type pandemic caused by the H3N2 virus resulted in an estimated 100,000 deaths in the United States, mostly those over age 65. Ste. Genevieve County recorded only one death in 1968 attributable to the influenza.
While the United States experienced other epidemics, such as that of the 1858 scarlet fever, 1906 typhoid, 1921 to 1925 diphtheria, 1916 to 1955 polio, 1981 to 1991 second measles outbreak, the 2010 and 2014 whooping cough, and the HIV/AIDs from 1980 to the present, the 1918 Influenza pandemic rates as one of the deadliest in modern times.
One hundred years later, the COVID-19 virus is devastating the United States similar to that 1918 pandemic. And like 1918, isolation (now called social distancing), quarantine (stay at home), personal hygiene (washing your hands), use of disinfectants, and limitations on public gatherings are the main weapons being used to reduce the impact and life cycle of this latest deadly virus.
(Information from the CDC website; Francois Valle’s letter to Trudeau, February 26, 1793; December 14, 1918 and December 28, 1918 editions of the Fair Play, the Missouri Secretary of State’s website listing death certificates and cause of death from 1910 to 1969.)