Two replacement motors for the clarifier at the wastewater plant have been purchased by the city of Bloomsdale since the March 10 Board of Aldermen meeting.
Due to the COVID-19 pandemic shutdown, last week’s scheduled Board of Aldermen meeting was canceled.
City clerk Lynnette Randoll, however, said that the two motors were purchased for less than $300 apiece, with one to be kept on hand as a backup.
The clarifier motor was apparently struck by lightning in early March.
Meanwhile, the city of Bloomsdale will continue withholding a 10 percent fee from its payment for the new rotor No. 2 at the wastewater plant.
Not long before the March meeting, Missouri Machinery and Engineering of St. Louis sent an invoice for $149,544 for the replacement rotor, which was installed in late January.
Mayor Paul Monia had said at the February meeting that some cosmetic things had not been completed by the company. Those projects included some grading, trimming of sharp edges on the machinery and programming the variable-speed drive.
Randoll and Monia last week confirmed that the city is still holding the remaining 10 percent, pursuant to Missouri Machinery completing the tasks.
“It’s just taking too long,” Monia said. “Nobody’s working.”
Randoll also said a bad culvert pipe on Parkview Drive had been replaced. … 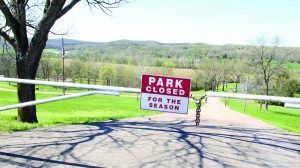 Meanwhile, the city opted to padlock the gate to Sunset Park.
Ste. Genevieve Mayor Paul Hassler recently remarked that, unlike Bloomsdale, he would not make Pere Marquette Park off limits to people due to its large size making social distancing possible.
Monia agreed that in the smaller confines of Sunset Park, maintaining six feet between people would have been harder to do during the COVID-19 scare.
“It was just the right thing to do,” Monia said.