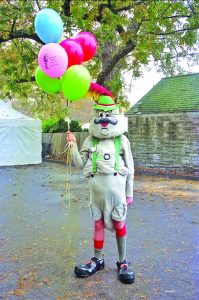 Ste. Genevieve in the past had liver dumpling contests and its own liver dumpling mascot, Oliver Dumpling. (Photo by BILL NAEGER/Reprinted with permission.)

By Bob Mueller
Special to the Herald
Every town has a special food to put it on the map. Liver dumplings — or as the locals usually call it, liver knaeflies — are one of Ste. Genevieve’s special foods, along with Oberle dog.
This delicious specialty was brought to the area by the German immigrants from the duchies of Baden and Schwabia who arrived in Ste. Genevieve between 1832 and 1870. The word knaefly is a phonetic spelling of the German word Knopfle, which means “little button” in English. Ste. Genevieve knaeflies are usually made with liver as an ingredient, though in Germany, they are usually made without liver.
If you ask for a liver dumpling in Germany, you would be served a big round liver dumpling in a bowl of broth.  In the last few years, Audubon served their schnitzel with a non-liver pasta-type knaefly and sometimes you will find this style on the Old Brick’s Friday buffet.
Liver knaeflies are a special occasion dish in many households here in Ste. Genevieve. They have become a traditional part of many family’s Thanksgiving and Christmas dinners. You can also find them at various restaurants in town and at some of the local church picnics and gatherings after funerals. You can also buy cooked or frozen liver dumpling dough from various organizations during the year if you don’t want to make them yourself.
Every Ste. Genevieve cook has their own special recipe for liver dumplings.
During the fall Deutsche Tage celebrations of 1999, 2000, and 2001, liver dumpling contests were held to determine who made the best — an honor which was hotly contested. Ste. Genevieve even had its own “liver dumpling” mascot named Oliver.
Knaeflies are typically made of flour, ground pork, beef, chicken livers or mixtures of livers, eggs, herbs and other seasonings. This is mixed to a rather stiff dough and then cut into the knaefly shape and cooked in boiling salted water. To get their shape, you can force the dough through a colander, use a sliding spätzle maker or “scratched” off a flat board (called a spatzlebrett in German) or the side of the mixing bowl or plate like my mother and many others did.
Knaeflies are sometimes fried in a little grease and served with bread croutons (called cockleburs in some Weingarten families) and parsley. They are a traditional part of a Ste. Genevieve fried chicken, mashed potatoes, green beans, and liver dumpling dinner. Many like them covered with gravy but some like them plain, covered in molasses, or with saltine crackers and onions on top. Leftovers have been known to be scrambled with eggs and onions the morning after, but who has leftover liver dumplings?
A knoplfe is smaller and rounder than another German pasta called spatzle. These too can be found on the tables of Ste. Genevieve. Spatzle, which is German for “little sparrows,” can either be made with or without liver. In our family, knaeflies had more of the Spatzle shape (long and skinny rather than round) because of the way our mother made them.
In Germany, those containing liver are called leberspatzle and are usually served topped with fried onions. Kasespatzle or spatzle baked with cheese is another favorite in Germany and it is their style of macaroni and cheese.
Here in Ste. Genevieve, spatzle are usually served with navy beans and stewed tomatoes as part of the traditional Friday “White Meal.” They are also sometimes served with fresh green peas or just by themselves as a side dish with fried croutons and gravy. Our family has found that adding spatzle to ham and bean soup makes for a hearty and filling winter meal.
A third type of German pasta served in Ste. Genevieve is called rivelies (also known called ribilies, rebilies, rively, or rivels). These are very small bits of a flour and egg mixture that are added to soup at the end of cooking.
In Germany, the dough is made stiff and grated into soup or broth. Our family’s method of making them was to mix flour and a beaten egg with your fingers until you had small crumbles of dough. They were added to the boiling soup and cooked for a few minutes. The first time my wife, who is not from Ste. Genevieve, had rivelie soup, she asked what the floaters were in it. So now we have another name for them.

Sirros restaurant has been serving their rively soup during the winter for 30 years.  Susie Tatham says that Ruthie Flieg made it there and her recipe is still used today.
The last and smallest of the German-inspired pasta in Ste. Genevieve are noodle or nuedln. They are a mixture of flour, eggs, salt and water. A rolling pin is used to roll the dough in a large circle or rectangle, then the dough is rolled up into a tube shape and cut into long noodle size strings of dough. The noodles are allowed to partially dry on a rack, the back of a chair or on a dish towel laid on a table or bed. They can be added to chicken soup as is or boiled, drained, fried with a little shortening, and served with homemade fried croutons. Sometimes the noodles are cut in trapezoidal shapes and boiled in chicken stock for chicken and dumplings. These thinly rolled dumplings are called sliders in our family and have been a lifelong favorite of my brothers and their offspring.
During this time when we are self-quarantining because of the coronavirus and doing our own food preparation, try some of these pasta shapes from Ste. Genevieve’s German heritage. Or if you have some liver on hand, teach your children how to make liver dumplings. It’s a good time to teach the next generation some tasty dishes and some lifelong skills.
(Bob Mueller is historian with expertise in Ste. Genevieve traditions.)