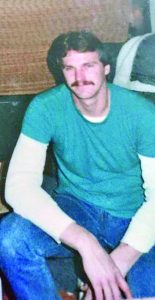 Robert W. Donnell of De Soto died in June of 1994 at the age of 30. His body was found severely burned in the back of his Chevrolet pickup truck on Roth Road in northern Ste. Genevieve County. (Photo provided by MATT DONNELL)

Matt Donnell still is looking for some answers concerning his father’s mysterious 1994 death.
Then a 30-year-old construction worker from the De Soto area, Robert W. Donnell was found dead in his white Chevrolet pickup on Roth Road near the Jefferson County line on June 10, 1994. His body had been severely burned.
Matt Donnell, who was 1 1/2 at the time, said from what he can gather, his father was a well-liked, low-key person with no known enemies.
“From what I know, he was a very likable person, didn’t have any problems with anyone,” Matt Donnell said. “That’s why this hits my mom  and my family the most, because he was such a nice guy. From what I’ve heard, he would give you the shirt off his back. So, to do this to someone so likable was just really bizarre.”
Little ever turned up on the case, which was never closed.
“They ruled it a homicide,” Matt Donnell said. “They followed up on numerous leads to no avail. From everybody that they’ve interviewed, it’s basically been just a wild goose chase.
“I’m hoping, bringing this up in the newspaper that maybe somebody will come forward with new evidence or maybe a witness after 26 years, somebody that would basically like to right a wrong.”
It would bring some closure to solve the 26-year-old mystery.
“He has three sons. We’ve grown up without him,” Matt Donnell said. “Then, he also has grandchildren. I’d just like to allow him to rest in peace.”
No pertinent information was ever really unearthed on the case. The Ste. Genevieve County Sheriff’s Office and the Missouri State Highway Patrol both investigated.
“I don’t know how they’re working it or even if they are working it,” Matt Donnell said of the State Highway Patrol. “but I know they’ve been led a lot of different directions and they haven’t been able to come up with any suspects at this time.”

Matt Donnell encourages anyone with information on the case to contact Missouri Highway Patrol Troop C headquarters at 636-300-2800. 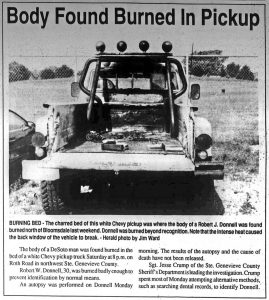 The June 15, 1994, edition of the Herald published coverage in relation to the death of Robert W. Donnell of De Soto. No one has ever been charged in relation to Donnell’s death. His son Matt still is looking for answers as to what happened. (From Herald archives)