Middle and high school gyms were filled throughout winter with basketball games and wrestling events, but a newer venue recently saw plenty of activity in a different sport.
Fans gathered for another season of Ste. Genevieve Youth Gym Hockey over the past few months at the Progress Sports Complex on the campus of the Ste. Genevieve County Community Center.
The league, organized by Randy Vessell and Eric Coleman, features minor and major leagues for grade school students.
“It was probably one of our best seasons we ever had,” Vessell said. “Every team was pretty much in the playoffs. The minor league and major league, in the first round, all went into overtime. One game went to three overtimes before there was a winner, and every game was by one goal. It was heartbreaking for some kids, but it was an outstanding season this year.”
This was the second season gym hockey took place at the Progress Sports Complex, which Vessell described as “phenomenal.”
Traditionally the minor league games were played at the Ste. Genevieve Elementary School gym, while the major league contests were played in the old middle school gym.
“Bryan Gegg and Brad Arnold [with the Ste. Genevieve County Community Center] are outstanding to work with,” said Vessell. “Those two people are awesome. It’s like a dream come true. I just want to thank Coach [Jeff] Nix and Mrs. [Julie] Flieg [with the Ste. Genevieve R-II School District]. They were phenomenal to work with, too. They were great, and I can’t complain, but here you walk in, and the gym is set up [with dasher boards featuring sponsors signage]. It’s like you’re playing hockey.
“The older kids are disappointed because they wanted to play there, and that’s why I gave them an opportunity this year, and I’ll probably continue that every year because it’s a great setup.”

See complete coverage and more photos in the April 8 edition. 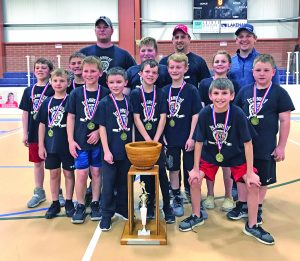