Just like any athlete, Taylor Werner finds herself in unfamiliar territory.
The former Ste. Genevieve distance running phenom and current senior at the University of Arkansas has put together a storied athletic career, but like many athletes, her athletic career has been put on hold due to the COVID-19 (coronavirus) outbreak. 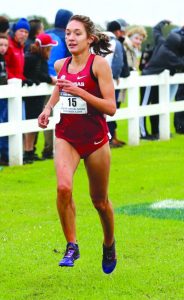 Former Ste. Genevieve standout Taylor Werner, shown during a race from a previous season with the University of Arkansas, is one of several college senior athletes that have had their last year affected by the COVID-19 pandemic. Due to the unusual circumstances Werner will still have a year of eligibility to compete in the indoor and outdoor track seasons next school year, and she has hopes of competing in the Olympic Trials, which have also been delayed due to the outbreak. (Photo courtesy of University of Arkansas athletic department)

“I was actually with my team at the indoor national championships,” Werner said. “The coach called and said they had canceled it. I was like, ‘Oh yeah, that sucks,’ and he was like, ‘No, they canceled all of it, outdoor included.’ I was honestly just shocked. It’s so far in the future I don’t think anyone expected that to happen. I think there’s a lot of comfort knowing it’s not just me that’s going through this. There’s a lot of other athletes that went through the exact same thing. I’m just trying to stay optimistic. I’d like to believe that everything happens for a reason. Obviously this was a measure that had to be taken in order to help the health of everyone around me. I just hope this situation gets cleared up. It sucks, but my running career isn’t over. There’s a lot of comfort in knowing that. I think everyone is going to get an extra outdoor season because of it. It’s all good.”
Werner opted to sit out the indoor track season to get ready for the outdoor season, and while she is a senior this year, she will be able to return to both indoor and outdoor track seasons next year and doesn’t have any regrets not running indoor track. Runners that participated in indoor track this year used up a year of eligibility for that season.
“Honestly I think I made a great decision because these athletes didn’t even get to run the national meet,” she said. “It’s kind of what measures your entire season. Had I ran this indoor season, like my teammates have told me, I feel like it would have almost been a waste, so I’m very glad I didn’t. I don’t want to say I was competing for nothing because we have the SEC Championships that they ran, but I wouldn’t have gotten to compete my senior at nationals and I wouldn’t have gotten that season back. Now I can come back next year and have an indoor season. Hopefully, knock on wood, that there’s not another virus (laughs), but I have no regrets. I can’t understand how badly this whole situation makes my teammates feel who this was their last indoor season. My heart hurts for them. It was really hard having to watch their reactions when they found out the championships were canceled.”
Despite the postponements, Werner’s collegiate running career isn’t over.
“A lot of my teammates who thought they were leaving this year may not leave after all, so that’s encouraging,” she said. “That is the plan for now [to run indoor and outdoor track next year].”

See complete story in the April 1 edition of the Herald.