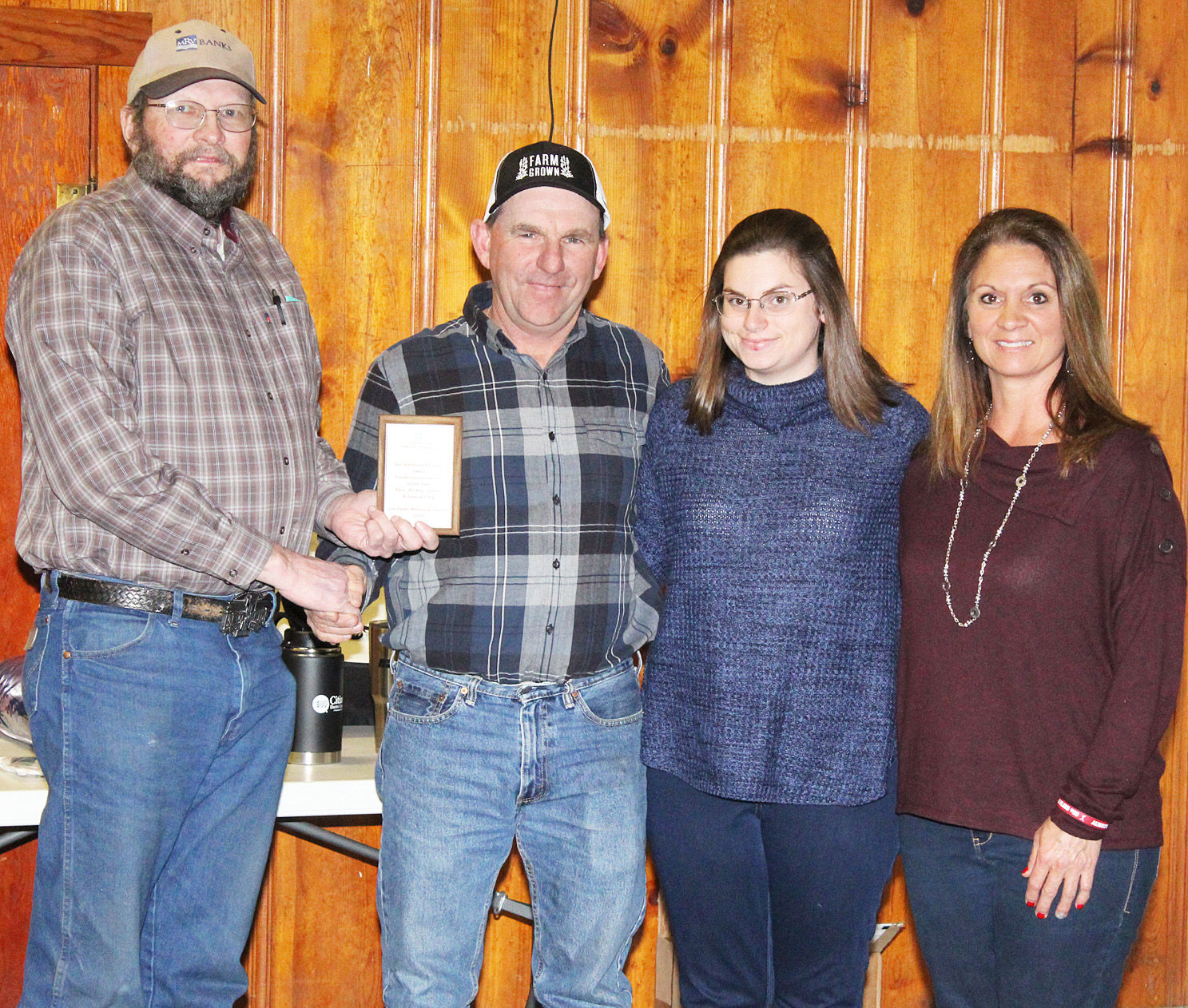 Five Century Farms were honored, Paul and Mickey Flieg were named Joe Patke Cooperator of the Year and attendees learned about invasive weeds during the 90th annual Ste. Genevieve County Soils and Crops Conference on February 20.

The event is jointly sponsored by University of Missouri Extension and the Ste. Genevieve County Soil and Water Conservation District (SWCD) and took place at the VFW Hall.

Katie Kammler, local extension horticulture specialist, explained that the program was launched at the time of the nation’s Bicentennial celebration in 1976, by the Missouri Commission For Agriculture, as the Centennial Farm Project.

Since then, more than 8,000 family farms have been honored.

Kammler said she was “thrilled” to have five farms to honor this year.

The Donze farm was purchased by Harry J. Donze from Henry Hurst on August 17, 1918, and is now owned by the Milton H. and LaVaun Donze Trustee. Over the years, cattle, hogs, horses, soybeans, corn, pasture, and hay have been raised there. A portion of it was developed into Donze Lake Development Corporations in 1969.

What once was a 40-acre farm has mushroomed into a 460-acre operation. Over the years, it has produced corn, wheat, hay, and beef cattle using horse powered equipment.

Griffin Farms was established in 1870 by George H. and Sarah Griffin. The couple came from Knoxville, Tennessee, in a covered wagon in 1868. He was a Civil War veteran.

They settled on 135 acres in Ste. Genevieve County. Their first home was a log cabin with a dirt floor. Sarah died after having six children. George married Martha Cunningham Turley in 1886 and had three more children.

The youngest of those, Harvey B. Griffin, took over the farming operation after George died in 1915. Harvey and Iva’s son, Harvey Lynn, farmed with his father and expanded the farm. Harvey Lynn’s son Jesse E. Griffin later expanded the operation to more than 800 acres.

The Griffins were recognized as the Farm Family of the Year for Ste. Genevieve County at the 2001 Missouri State Fair in Sedalia.

The McDaniel-Conrad-Griffin Farm was established in 1910 by James Edward McDaniel when he bought 240 acres for $3,250 on Coffman Road.

The property had a nice brick house, but rough terrain behind the house that was called the “Greasy Hills.” In early years, the farm [across the road]  raised crops, cattle, milk cows and chickens.

Later on, a concrete silo and barn of wooden pegs were built. Both historic structures still stand.

James Edward and Clare McDaniel’s youngest girl, Melba Margaret McDaniel, married George Edwin Conrad in 1945 and bought part of the farm in 1958 and the rest of the acreage in 1996. George died in 2007.

A fifth generation is poised to take over the farm: Dale and Melinda’s son, Jesse Wyatt Griffin, and Deanna and Mark’s son, Griffin Phillips.

The Henry and Johanna Grass Farm was established in 1905.

The Grass family was farming in the region much earlier, though, with Henry’s grandfather George coming to America in 1848 and settling on a nearby farm soon after.

Currently, Leon and Corey Grass run the farm, where they grow corn, wheat and soybeans and raise chickens. They also sell eggs.

In recent years, they have also sold flour and raised hogs, cattle and oats.

In fact, Grass Farms & Foods flour once was carried locally at Mary’s Market and in all St. Louis area Schnucks stores and Whole Foods markets. They still make flour, but only for their own and friends’ use.

Joe Grass was the second Grass to own the farm, followed by his brother and sister-in-law, Francis and Loretta Grass.

Corey Grass, their grandson, purchased the farm in 1990. His oldest daughter, meanwhile, is working on a degree in agriculture from Cornell University in New York.

Bob Eckenfels, chairman of the SWCD, presented the Joe Patke Cooperator of the Year Award to Paul and Mickey Flieg.

Paul started farming with his father, Aloysius, while in high school. He and his father became partners in 1982, after Paul graduated.

They raised row crops of corn, wheat, beans and milo. They also raised cattle, swine and chickens as the operation grew.

After Aloysius retired in 1992, Paul and his family purchased the farm. Today they still raise cattle, hogs and chickens and row crops of corn, wheat and beans.

They became cooperators with the Soil and Water Conservation District in 2000.  Since then, Paul has practiced many land beneficial programs such as permanent vegetative cover establishment, water improvement reservoir, and beef and ruminant waste management to help contain livestock waste for use in field crop production, and planting cover crops, as well as no-till farming to help control field erosion.

See complete coverage in the February 26 edition of the Herald.