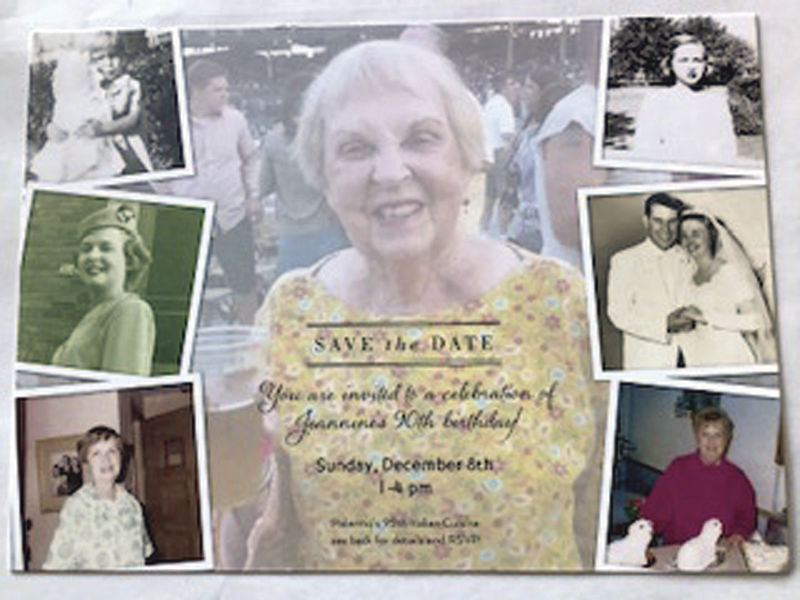 She is the daughter and middle child of the five children of Irma Rehm Stewart and Raymond Stewart. Her siblings were older sister Betty, older brother Raymond Jr., younger sister Shirley, and baby brother Don. Their family home was located at 454 Roberts Street. Betty’s husband, Tom Roth, a World War II veteran and recipient of two Purple Heart medals, was nominated for the Ste. Genevieve High School Hall of Fame in the spring of 2018. Jeannine is the lone survivor.

She attended the Ste. Genevieve Grade School and Ste. Genevieve High School, from which she graduated in May of 1947. The class’ senior high school trip was to New Orleans. Some of her schoolmates included Norma Samples Rottler and Marzene Bader, who both resided in Ste. Genevieve until their recent deaths, and Charlie Hauck, who now lives in Florissant. All kept in touch and regularly attended their annual high school reunions well into the 2010s.

Jeannine Janulis first started playing the drums in sixth grade and played in the high school marching band. At 14, she started working in the Dorlu Dress and Gift Shop, where she learned to wrap gift packages. Shortly after she graduated from high school, she was asked to represent the KSGM radio station as part of Radio Appreciation Day with the St. Louis Cardinals. There, she met then-Cardinals baseball announcer Harry Caray, who presented her with a souvenir engraved watch.

At 21, she told a family friend she was interested in becoming an airline stewardess and the friend arranged an interview for her with Trans World Airlines (TWA) in Kansas City. Before she left for her training, she had to cut her long blonde hair to the required short length. Knowing she was going to be leaving her family and her hometown, she could not stop crying, but her mother kept a brave face so her daughter would have the courage to make the trip.

She finished stewardess training and was assigned to Chicago, her new home.  During her career, she served on flights that included many celebrities, such as TWA owner Howard Hughes, actor Van Johnson, and baseball player Joe DiMaggio. One time, boxer Rocky Marciano helped her serve the meals on a flight.  On another trip to Washington, D.C., she and her crew encountered the king and queen of England in between flights.

In 1951, in the early days of television, the Indiana-based Bendix Washer and Dryer company president asked Jeannine to accompany Bendix representatives and a family of nine to New York City to appear on a television program with TV host John Reid King. The visit was chronicled in the January 1952 issue of McCall’s magazine. Also in 1951, she flew on presidential canddate Dwight D. Eisenhower’s campaign charter flights with senators from across the country.  In 1953, TWA asked her to go to the Fair Store on State Street in downtown Chicago to be photographed changing the clocks for the first daylight savings time. The photograph appeared in the April 23, 1953 edition of the Chicago Sun-Times. She also flew on the inaugural flights to O’Hare International Airport in 1954.

She met her future husband Len Janulis on a blind date in Chicago in 1951.

She left her airline stewardess job in 1955, since the rules at the time did not allow stewardesses to marry.

Shortly after marrying in August of 1955, she began working as an accounts payable clerk for the Continental Can Company, where her husband worked. In 1958, when she was expecting her first child, Christopher, the employment rules at the time required that she stop working three months before Chris was born in February of 1958. She had her second son, Stephen, in February of 1959; daughter Lynn in December of 1960; and Jeff was born in March of 1963.

She was a stay-at-home mom for 14 years, raising her children and remaining active in her community before she later returned to formal employment. She went on to work more than 18 years with the Chicago Public Schools before retiring in 1993.

After retiring, she continued volunteering at her church and actively served in her neighborhood civic organization.

In 1997, she compiled the recipes she had collected throughout her life, including all of her mother’s homemade cooking from her years in Ste. Genevieve, into her cookbook entitled, Forty Years of Recipes that was printed in 1997. A signed copy of her cookbook, dedicated to the Ste. Genevieve Library and her hometown, was donated in 2018.

In 2005, she was presented with the Senior of the Year Award from the Chicago Park District and the Clearing Neighborhood Civic League.

Jeannine remains active in her church and community. She is also the proud grandmother of both Joel and Kyle.

Over the years, she has remained in active contact with her roots and her friends in Ste. Genevieve, visiting for high school class reunions and speaking with some remaining classmates on the telephone every couple of weeks. She loves to visit with her friends, and she is very proud of her hometown.  She has been an active subscriber to the Ste. Genevieve Herald for many, many years, reading the weekly paper and keeping in touch with what is going on in Ste. Genevieve.

A 90th birthday celebration luncheon was held for Jeannine on December 8, at Palermo’s Restaurant in the Chicago suburb of Oak Lawn, Illinois. More than 100  family members and friends attended.  In addition to the birthday luncheon, she was honored with a three-page birthday resolution from Chicago Mayor Lori Lightfoot, City Clerk Ana Valencia, and the Chicago City Council; a birthday proclamation from Ste. Genevieve Mayor Paul Hassler and City Clerk Pam Meyer; a congratulatory letter from the Washington, D.C.-based Association of Flight Attendants; and congratulatory letters from the Chicago Cubs, Chicago White Sox, Chicago Bears, Chicago Blackhawks, and Chicago Bulls professional sports teams.