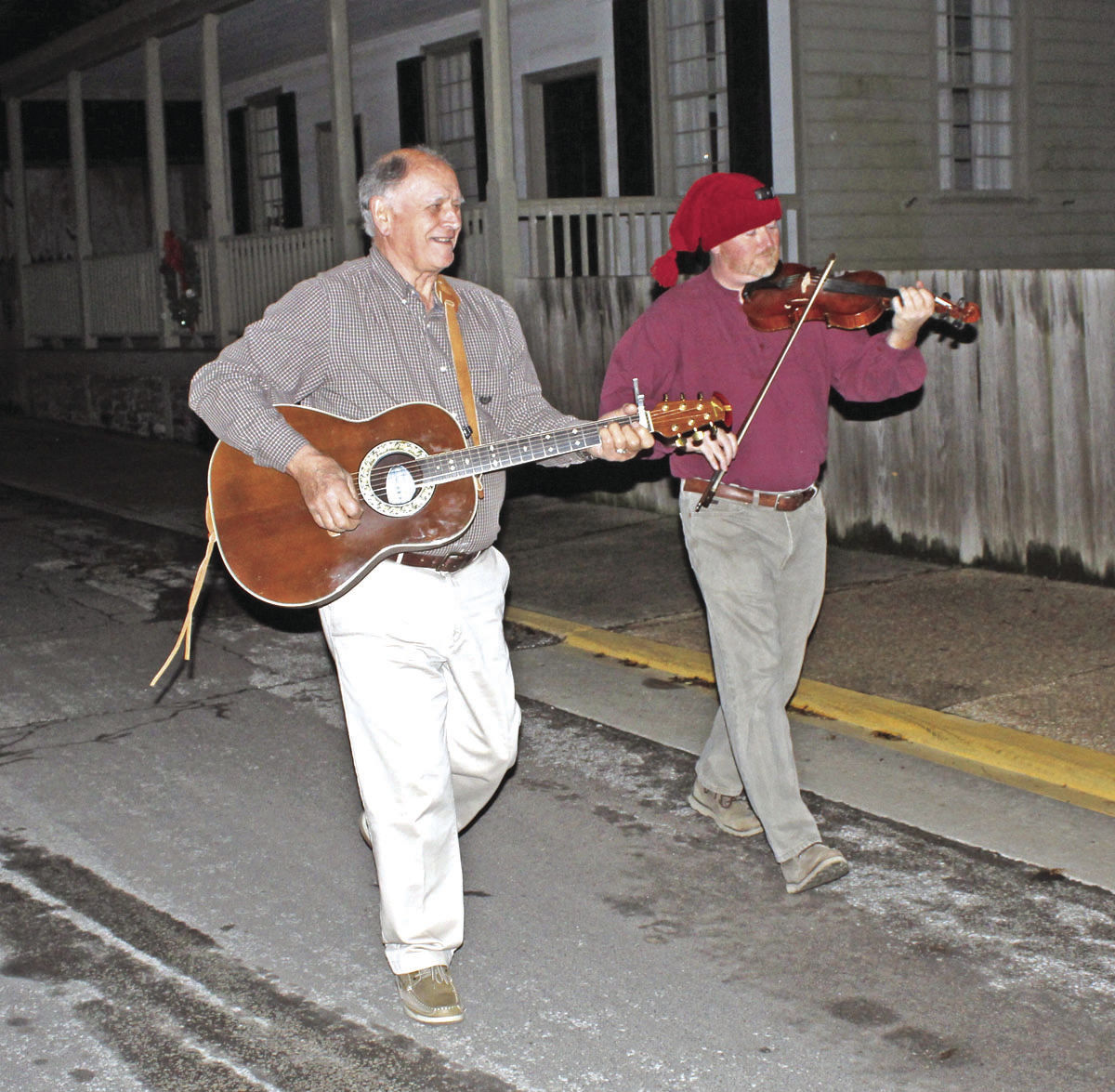 La Guignolee, one of Ste. Genevieve’s most cherished customs from our French Colonial heritage, has survived almost three centuries.

Some think that it started during the time of the Druids in Europe and was one of their rites at the beginning of the new year. The custom crossed the Atlantic to French Canada and then down to the Mississippi Valley Illinois Country. Eventually, the custom became one of the highlights of the end-of-year social season known as Le Temps des Fetes (Time of Celebrations) in the villages of Kaskaskia, Cahokia, Prairie du Rocher, St. Louis and Ste. Genevieve. People began the celebrations with Le Reveillon party after the Christmas midnight Mass.

As part of this holiday season, the inhabitants ended the year on Saint-Sylvestre night (New Year’s Eve) with the customary courir la Guignolee (running the Guignolee).

Those participating in the event were called variously guignoleur, guionneur, or guignoleux. Very few records exist from the colonial period about this custom. However, John Reynolds, who authored “The History of Illinois,” wrote “The ancient innocent custom was for the young men about the last of the year to disguise themselves in old clothes, as beggars, and go around the village in the several houses where they knew they would be well received. They enter the houses dancing what they call the Gionie, which is a friendly request for them to meet and have a ball to dance away the old year. The people, young and old met, each one carrying along some refreshment, and then they do, in good earnest, dance away the old year.”

Refreshments have always been an integral part of the La Guignolee and this sometimes resulted in over-exuberance by the revelers. It must have upset a number of people as the Ste. Genevieve Board of Aldermen passed an ordinance on May 30, 1849, banning the practice. The ordinance banned the guignolee, participating in a sharivari (chivari), or going about rattling a tric-trac (a noisemaker using a pivoting wooden hammer). The fine for such unlawful conduct was $4. Evidently, some local residents, ignoring the law, ran the Guignolee in 1854 and were subsequently arrested. They asked for jury trial and hired Ste. Genevieve’s best lawyer of the time, the Honorable John Scott. Witnesses testified that those arraigned did actually run the Guignolee but did so in a peaceful and orderly manner. Scott contended that the custom was in existence before the Louisiana Purchase and that it had continued uninterruptedly up to this time. He further argued that those running the Guignolee were exercising and enjoying one of their rights and did nothing but what they had a solemn right to do. After the closing arguments, the jury left the courtroom and returned in just a few minutes with a “Not Guilty” verdict. It was reported that a loud and deafening hurrah shook the old building to its foundation and the jury were carried off in triumph — to liquor.

There have been different spellings for the custom over the years including Guillone, Guignolle, Gui-Annee, Gaie-Annee, Gui-l’an-neu, Guillannee, Geoni, Gionie and Guionet. In a January 3, 1885 article, the Fair Play provided both French and English versions and indicated that Gui-Année was the proper spelling. Joseph Ernst, editor of the Herald, took exception to the article and an editorial war lasting a month ensued. Regardless of the spelling, the custom was well enjoyed the just-passed New Year’s Eve as three different groups ran the Guignolee.

Running the Guignolee was not only done by the French descendants in Ste. Genevieve but was also conducted by those of German descent, as evidenced by January 1, 1888 article in the Herald where John Gremminger of Zell praised one group who came to house but protested the behavior of a group consisting of young Germans arrived at 3 o’clock in the morning shooting guns and disrupting the household.  In 1898, a group was organized in Weingarten and another from Zell also ran the Guignolee with their friends in this neighboring village. In 1959, the tradition was conducted in Bloomsdale. While the words of this ancient song have been published many times over the years in both French and English, the Herald’s special addition for the 1935 Bicentennial celebration listed a German version.

While the words were written down over a century and a half ago, the music was passed down from generation to generation and played by ear rather than from sheet music. In 1970, Bill Simon, a composer and son of Ste. Genevieve, arranged the music and it was printed and sold by the Foundation for Restoration of Ste. Genevieve. Various recordings exist of La Guignolee being sung by groups from Prairie du Rocher, Bloomsdale, Old Mines, and Ste. Genevieve. A version played by Dennis Stroughmatt in the upper Louisiana fiddle style can be found on his 2006 “Gambler’s Fiddle” recording. Another version was played by one of Stroughmatt’s Old Mine mentors, Charlie Pashia, on a 1977 album titled “I’m Old but Awfully Tough.” It can also be heard on the 1998 Smithsonian’s “The Mississippi River of Song”.

After the merrymakers completed their running of the Guignolee, they often had a banquet to celebrate the New Year. The 1915 event was described as the most elaborate and successful in the history of Ste. Genevieve. The participants dined on oysters, gumbo, grilled squab, asparagus, saddle of lamb with mint sauce, pea timbales, various salads, cheeses, and a paradise cake. Drinks included wine, champagne, cognac, and coffee.

Balls were also held to celebrate the arrival of the new year and La Guignolee groups would visit and participate in these balls. In 1877, a “Big Guignolee” was held at the Union Hall (where the DuBourg Centre now stands). It was followed by a “Little Guignolee” Ball on January 2 at the same location. A ball held at the Armory on Washington Street in 1909 included a visit from three Guignolee groups. Disaster befell the 1939 event when New Year’s Eve fell on a Sunday and a law prohibited the sale of alcohol on Sundays enforcing a more sober event until the stroke of midnight. The revelry was further constrained by another law which required the sale of alcohol to cease at 1:30 a.m. One wonders about their adherence to the law based on past reports about the fun-loving singers.

Those running the Guignolee were not always young French or German men. The 1907 festivities included an African American group as well as a juvenile company singing the old song. African American groups also appeared in 1904, 1919, and 1923.  Due to World War I, the men’s group did not do the Guignolee in 1917 but a junior group sang the song at the Armory Ball. Both a men’s group from Ste. Genevieve and a children’s group from the Kehl School on White Sands Road celebrated the custom in 1945 with much joy due to the American victory in World War II. Not to be outdone by the men, a ladies group ran the Guignolee in 1937 and the Girl Scouts did the same in 1958 and 1960. In recent years, females (guignoleuse) dressed in costumes joined the male guignoleurs to sing La Guignolee.

While the Guignolee was not performed in some years due to war, floods, or possibly indifference, the tradition continued due to the past leadership from Guignolee leaders Alfred Papin and Paul Morice, as well as financial support from Mississippi Lime Company, the Chamber of Commerce, Muny Band Fund grants, and others.

Today, Pete Papin, his son Mike, and a loyal band of guilloneurs keep this cherished tradition alive as part of our cultural heritage.