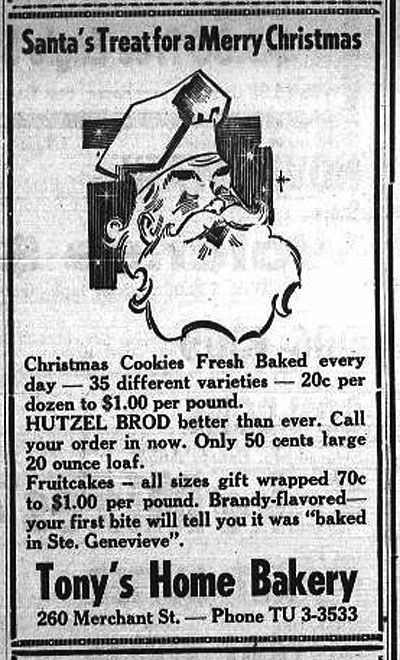 While fruitcakes in general are often maligned, there was a type of fruitcake near and dear to Ste. Genevieve residents, especially those of German descent.

Hutzel Brod was a traditional German bread that included candied and dried fruit as well as local pecans and walnuts.

The local name, Hutzel Brod, is a phonetic pronunciation of the German Hutzel Brot. It was even called Wurtzel Brot in a 1914 advertisement by our Eagle Bakery. This fruitcake-like bread is a Christmas treat across southern Germany. Since the majority of German immigrants to our area were from Baden, Wurttemberg, and an area called Swabia, all in southern Germany, they brought along their recipes for this special bread.

The name is derived from the German word “hutzeln,” which means dried pears; and “brot,” which is the German word for bread. Other German regional names included “Schnitzbrot,” “Kletzenbrot,” “Bierewecke,” or simply “Fruchtebrot” (fruit bread).

Being frugal, German housewives dried part of their harvest of pears, apples, cherries, and apricots for use during the cold winter months.  In the fall, they gathered local nuts and baked them along with the dried fruit into a sweet yeast bread.

Hutzel Brot was traditionally made on December 21, which is the feast day for St. Thomas and the winter solstice. German wives and maids would also embrace their fruit trees with their arms still full of dough to ensure a good harvest in the following year.

In Ste. Genevieve, Hutzel Brod was made at home with recipes handed down from one generation to another. It was also provided by our local bakeries, such as the Eagle Bakery on Merchant Street and Tony’s Home Bakery located first on Main Street and later at 262 Merchant.

For our current older generation, they have fond memories of Tony’s peanut coffee cake, Hutzel Brod, and other sweet treats. In a 1962 advertisement, Tony offered Hutzel Brod, 35 types of cookies at 20 cents per dozen, and fruitcakes soaked in brandy.

If you would like to try making Hutzel Brod, Lucille Basler’s recipe for her Whutzelbrod is in the older Joys of Homemaking cookbook by the Ste. Genevieve County Economics Council. Tony Zarinelli’s recipe as well as those from Maggie Staab and Grace Bauman can be found in the Valle Schools cookbooks. Jeanette Wood and Sandy Meyer provided their recipes in the Taste of Ste. Genevieve cookbook by the Friends of Ste. Genevieve County Memorial Hospital. A unique recipe, which includes potatoes in the batter, is found in the Country Kitchen cookbook published by the Weingarten parish. Or if you have been good and not naughty, one of your friends might share their family recipe with you for this Ste. Genevieve-style fruitcake.