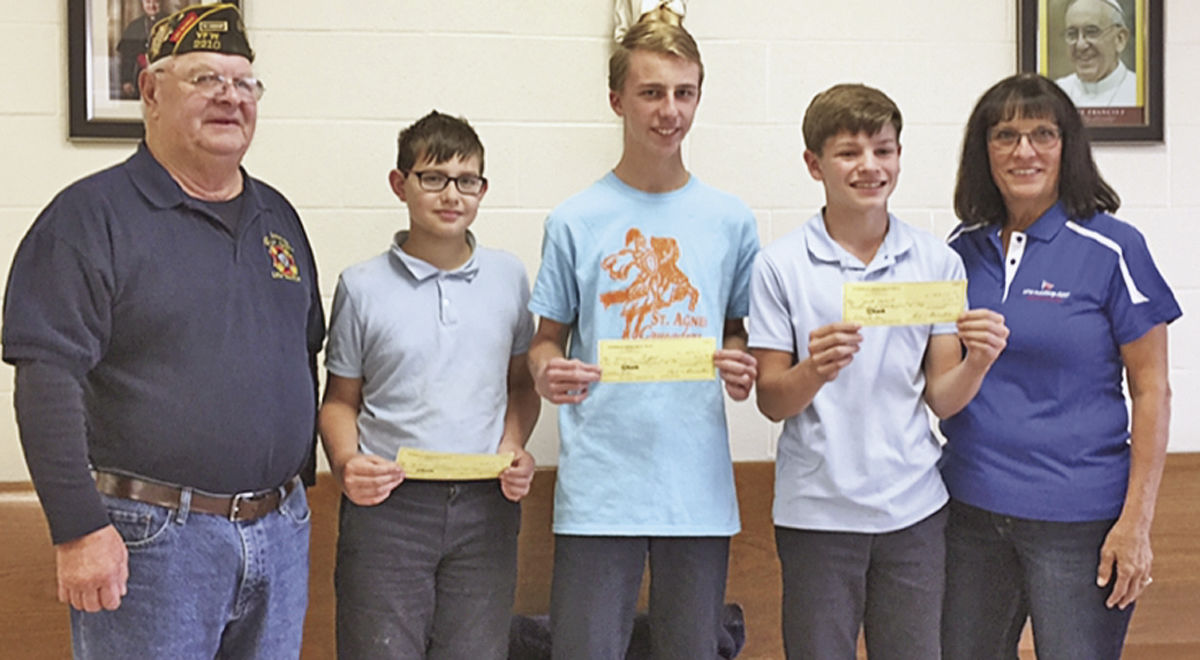 For the first time ever, all three winners in the Patriot’s Pen essay competition for middle school students were boys.

“That’s never happened before,” said Lois Flieg,  youth activities chairperson for the VFW Auxiliary, which sponsors the event along with VFW Post 2210.

Flieg said it was also somewhat unusual to have winners from all three middle school grades. She said eighth-graders dominate the competition some years.

Unlike the Voice of Democracy contest, winners are not ranked first, second and third. All three move on to the next round of competition.

“It’s always nice to see kids express appreciation for their country,” Flieg said. “They learn a lot of lessons doing it.”

Griffard, an eighth-grader, is the son of Phillip and Adrianne Griffard.

Fallert, a seventh-grader, is son of Kevin and Kelly Fallert.

Tucker, a sixth-grader, is son of Ron and Sharon Tucker.

This year’s theme was “What Makes America Great.” Each winner gets a cash prize and the essay moves on to district competition.

Tucker focused on the freedoms and opportunities Americans have that citizens of other countries do not have.

“We have many freedoms such as freedom to get an education, freedom of speech, and freedom of religion,” Tucker wrote, adding, “The American schooling system is better than many other countries’ systems.”

Fallert, while touching on freedom of speech, wrote that the U.S. has  “amazing laws that keep our environment, people, and animals safe and healthy.”

We are lucky not to live in a “war-torn” country, he said, and for “a great economy that allows people to pick from a variety of jobs and receive good pay to help them support their family or self.

He also stressed that America being a “melting pot” is vital. “America accepts everyone for the person they are not where they came from,” he wrote.

Griffard, meanwhile, focused on how Americans come together in good times and bad times.

“What I love about America is our ability to unite together when our country is in trouble,” he wrote, giving September 11, 2001 and both world wars as examples of times of trouble. He said it also comes together for annual events like Independence Day and for special occasions like the 1969 moon landing.

(Information, including copies of the essays, from attending Lois Flieg.)