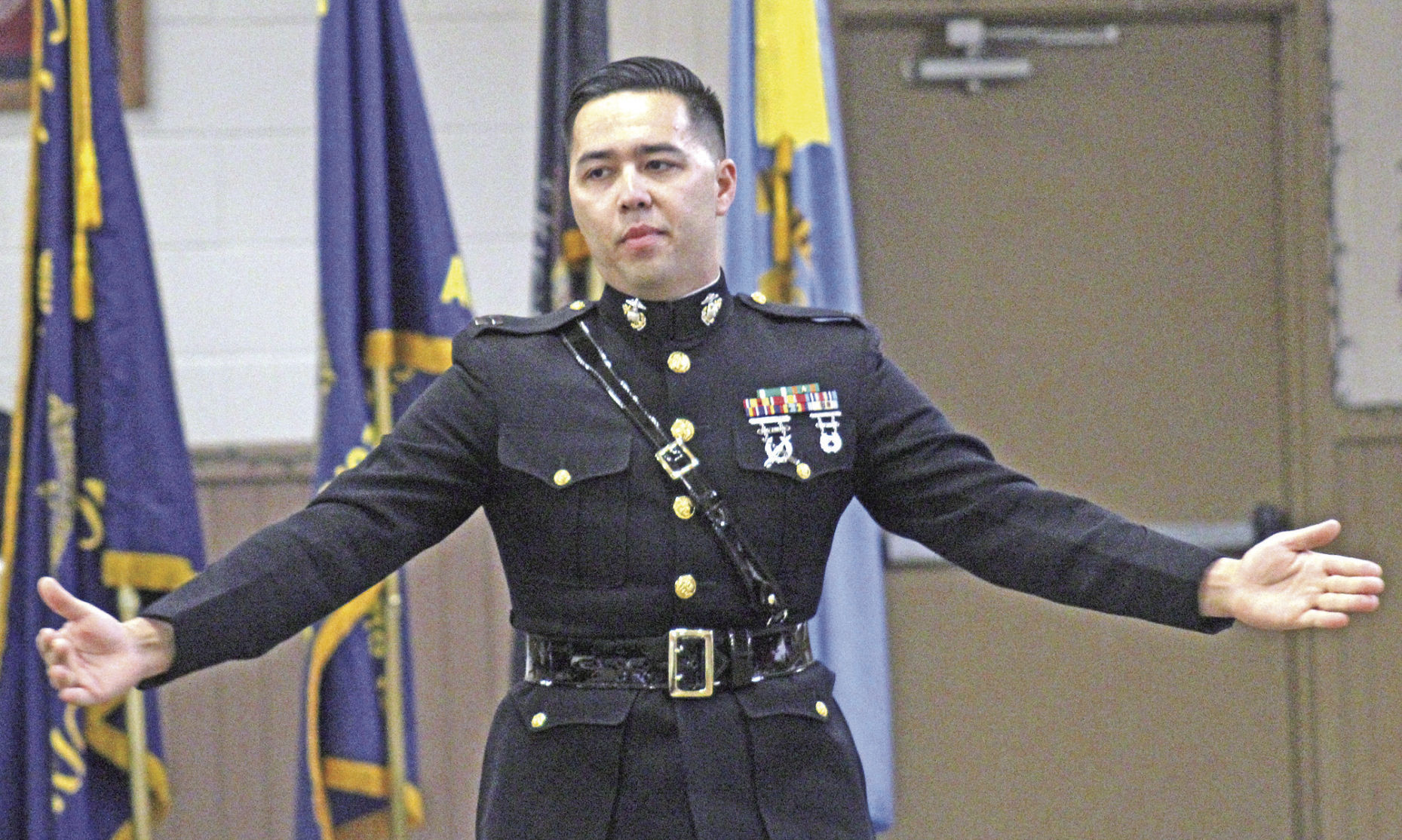 On a day to honor veterans who served their country, a current service member thanked the loved ones who provided support and inspiration for those veterans.

Captain Philip Kwan, a Ste. Genevieve County resident serving in the U.S. Marine Corps, was the featured speaker Monday in the Veterans Day ceremony at the American Legion Post 150 Hall in Ste. Genevieve.

A full house attended on a cold day with threatening weather moving in.

Kwan, whose wife Courtney is an eye doctor in Ste. Genevieve, introduced himself as an infantryman who has served 10 years in the Marine Corps and has been deployed to various countries in support of Operation Enduring Freedom and Operation Inherent Resolve.

He then turned his comments toward the veterans, who he said are “the reason that, truthfully, I exist.”

Kwan’s grandparents lived in the Philippines during World War II when Japan invaded.

“They were not sure what their future held, and they clung to this small beacon of hope represented by that flag right there,” Kwan said as he pointed to the American flag. “They clung to the idea that maybe if I can bring my family to this place called the United States, then our family might have a future.”

The U.S. liberated the Philippines, and Kwan’s family started to emigrate to the U.S. in the late 1960s.

Kwan, who graduated from Potosi High School in 2005, attended St. Louis University before transferring to the University of Missouri once he decided on his path toward joining the Marine Corps.

“I looked at these heroes who in my mind had truly saved my family and given me an opportunity that I couldn’t have had anywhere else.”

Kwan was starting high school when the terrorist attacks took place on September 11, 2001, which he said was a defining moment for those in his generation who have gone into the service.

He said the success of the military in the modern era, with more than 100 conflicts since 1990, is because of those who served previously.

“We have a standard to uphold,” Kwan said. “We know there’s a metric that must be met.”

In addition to recognizing veterans, Kwan chose to recognize their family members.

He talked about the sacrifices he and his wife made in their relationship.

“I can’t do my job without that support,” Kwan said, “and I know that as veterans, we can’t do our job without the support of the American people and of our family and friends. I’d like to say thank you all for serving those who serve.”

(Information from the Veterans Day ceremony.)