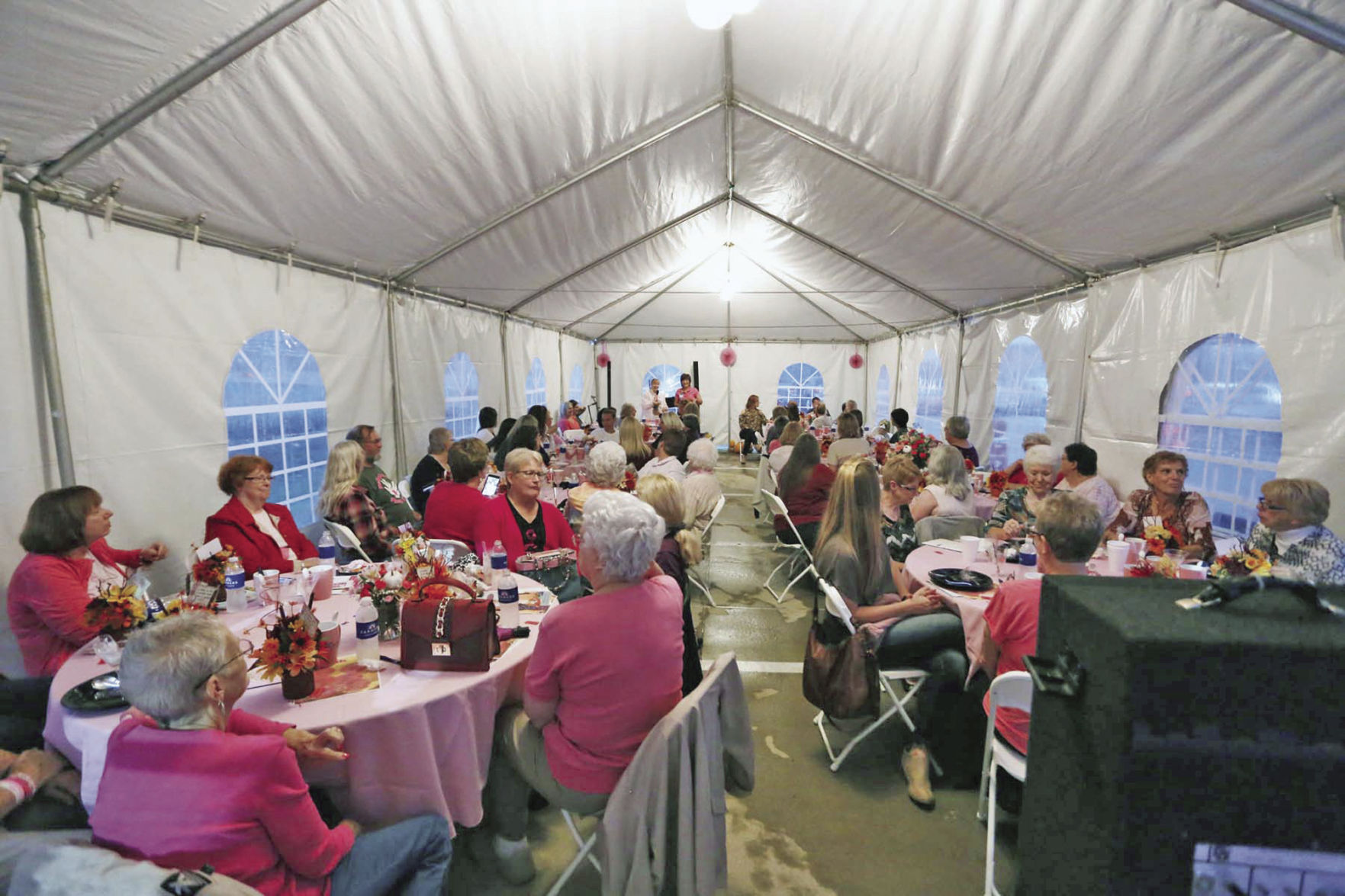 The ninth annual Spirit of Pink, hosted by Ste. Genevieve County Memorial Hospital (SGCMH), took to the great outdoors with a harvest-themed event October 10 that focused on healthy eating and a healthy dose of inspiration.

The event was staged under a tent on the parking lot of the Bloomsdale Medical Centre. The light intermittent rain added to the ambience. Combined with pumpkins and fall flowers, the rain indicated a change of seasons was in the air.

Nate Molnar, head chef at the Audubon’s Grill and Bar, provided the entree, an assortment of cheese and vegan pizzas. He also provided a mini vegan stir fry demonstration.

“I was excited to do this demonstration,” Molnar said. “A lot of people underappreciate the value of having their own garden and growing their own fruits and vegetables. Back in the day, that was the norm, and we’ve gotten away from that with our mass-produced food. It’s amazing the combination you can put together when you grow your own.”

SGCMH food and nutrition services whipped up vegan and plant-based desserts of truffles, chocolate strawberries and cheesecake — all of which had been consumed by the end of the evening.

Dr. Theresa Cavins, SGCMH breast and general surgeon, said the event organizers chose to celebrate outside to celebrate the harvest, given that a community garden is in its second year at the Bloomsdale Medical Centre.

“We want to focus on everyone eating vegetables, growing their own food, being outside, getting exercise, and being part of a community,” Cavins said. “All these things we know make us healthy, happy and whole. I hope you’ll embrace this lifestyle as much as we do.”

“Besides healthy eating and exercise, a community that supports each other is a really important thing to have in our lives,” Crecelius said. “I look around and I see so many amazing examples of friends supporting friends and families supporting families. We’re really lucky to be a part of this community.”

Cavins said Voss is a wonderful example of how you can rise above things that happen in your life and come out on the other side a better version of yourself.

At the age of 34, Voss had just had her second baby.

While she was nursing, she noticed a rather large lump on her breast.

She went to her doctor and it was written off as a duct ectasia of the breast. She was scheduled to return for a visit in three months. Her follow-up visit proved inadequate to her and provided no real resolution.

“My husband Jordan began working in the OR [operating room] at Ste. Genevieve County Memorial Hospital just before all this started and he would tell me how awesome Dr. Cavins was,” she explained. “After that second visit, I called him and said I wanted to see her.”

On October 3, 2016, her world was forever changed. She was diagnosed with Stage III HER2-positive breast cancer.

“I came out to this very parking lot and called my dad and told him I had cancer,” she said. “When you hear those words, ‘you have cancer,’ it’s pretty surreal. This is something that happens to someone else. Things moved very quickly after that. I was sent to Sandy Schilli in oncology and was prepared for a port for chemo within a couple of hours. At this point I had a choice. I could stomp my feet and throw a fit, or I could stand up and get ready for the fight of my life.”

Nicole Voss went on to describe her progression of emotions that occurred just as Cavins said they would.

“There’s grief and sadness,” she said. “You miss things like getting up in the morning and feeling good. Then there was anger. I remember yelling at Jordan and saying I wasn’t mad at him and I wasn’t mad at God, but I was really mad that we had to go through this. Then I hit a pivotal point and hit acceptance. You really do have to go through all of those emotions.”

Nicole Voss said one of the most important things when facing a disease of any kind is to find a good support system.

Another memorable point for Nicole Voss was the loss of her hair. With courage in hand, she went to Applebee’s by herself wearing the tell-tale hat that cancer patients sometimes wear.

“I felt people looking at me and it was very uncomfortable, but I thought if I can do that, I can do anything,” she said.

Not long after, she decided to shave what hair she had left. She gathered her family and made it a festive event. Thereafter, she tried to keep things as light as possible.

“You have to find humor in the journey to get through it because it’s a hard journey,” she said.

Now at age 37, she has been through eight rounds of chemotherapy, a double mastectomy and reconstruction, 34 rounds of radiation, and a terrible infection that left her without an implant on one side.

“Right now, I go back and forth and debate whether I’m going to have surgery and fix things, or am I just going to accept my scars, be who I am and remember that’s how I survived,” she said. “But we have a choice. We can let the situation define us or we can rise above it. We can help other people get through their journey and do what we can to make a difference.”

Some of the 70 women in attendance grabbed drinks for the ride home — “mocktails,” in keeping with the evening’s healthy theme.

(Information in a release from Ste. Genevieve County Memorial Hospital.)