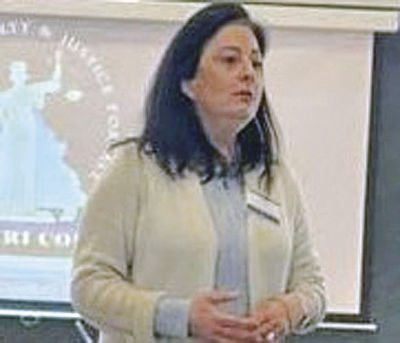 The General Federation of Women’s Clubs (GFWC) Woman’s Club of Ste. Genevieve during its October 14 meeting walked in the footsteps of a victim of domestic violence during a presentation conducted by Lisa Page, Appellate Judge of the Missouri Court of Appeals, Eastern District.

The “Have Gavel Will Travel” program is one of many conducted free through the Missouri Supreme Court Civic Education Speaker’s Bureau, which can be reached at 314-622-4787 or civic.education@courts.mo.gov.

Club members discovered why it is so difficult for victims of domestic violence to get away from a harmful situation. Often, the victim has children and a pet to find another home for in addition to having no money for food, clothing, etc. — factors that make it hard to leave and start over.

Emily Macdonald, director of the crisis shelter in Perryville let members know that the shelter also serves Ste. Genevieve County and can be reached at 573-547-2480.

The GFWC members have supported the shelter for several years and it was no different at this meeting.

The members donated 169 pair of underwear, 273 pairs of socks and 118 hygiene and household items in addition to a monetary donation.

The club members wore pink in honor of Breast Cancer Awareness month, and the hostess committee went all out with special fall decorations.

The addition of three new members who joined at the meeting brought total club membership to 77.

In honor of Missouri Day, which is always the third Wednesday of October, members competed in a Missouri Jeopardy game. Linda Hermann came out the big winner with a little help from her GFWC friends.

The General Federation of Women’s Clubs and the Woman’s Club of Ste. Genevieve are dedicated to strengthening the community and enhancing the lives of others through volunteer service.