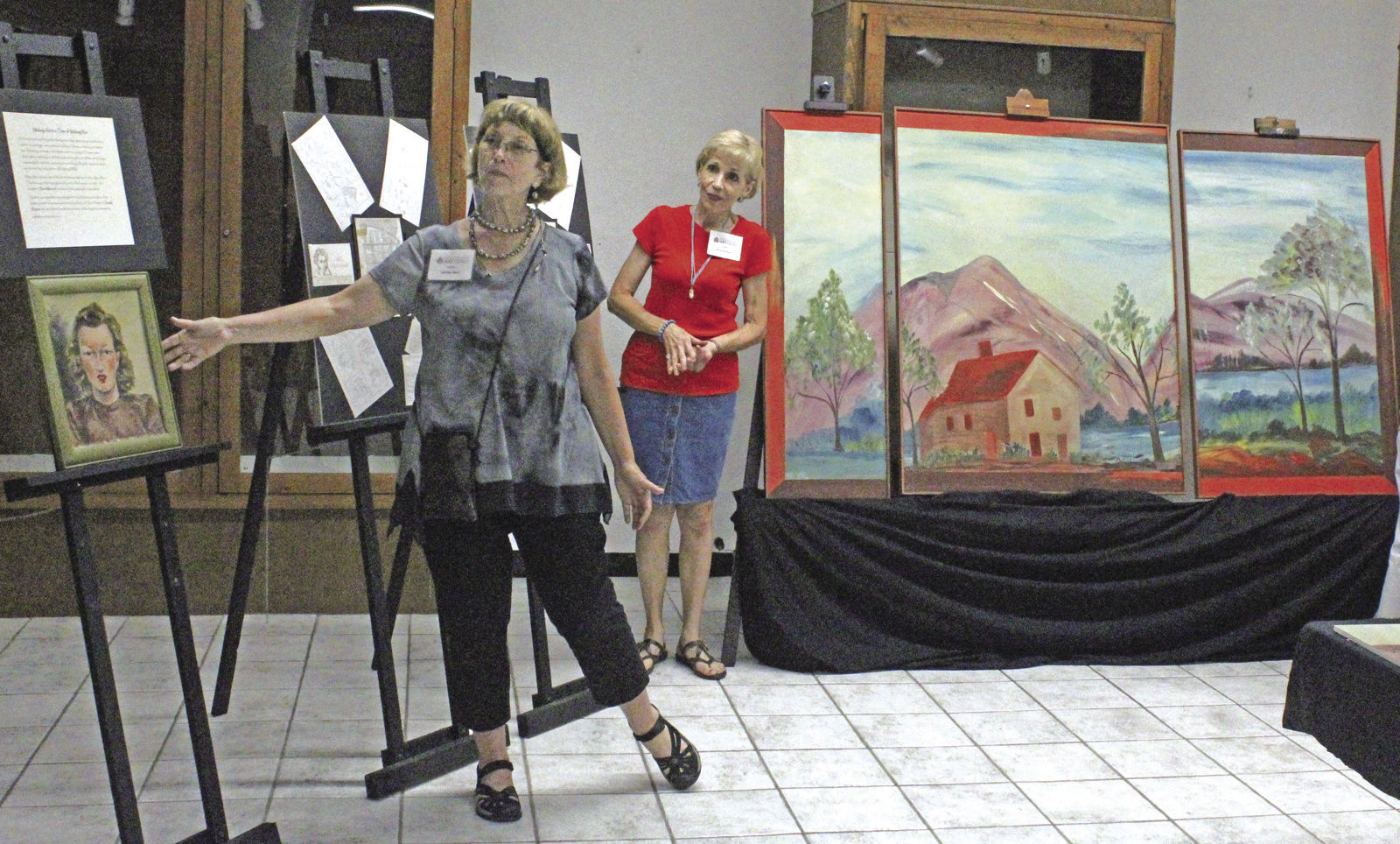 The featured artwork in the “Saving Art — Saving Our History” exhibit at the Ste. Genevieve Art Center and Art Museum in August was a piece of art history hidden away for the past 25 years — a 16-foot wall mural of the Italian countryside completed in 1944 by Prisoners of War from Camp Weingarten using house paint directly on sheet rock that once filled a side wall of Weingarten Jaycees hall.

When it  was removed from the hall in 1994 under the direction of Wilson Donze, the mural was donated to the Ste. Genevieve Art Guild, and storage space was provided by Herb Fallert in the attic of the Show Me Shop.

In 2018, after securing a place for an 8-foot section of the mural to be displayed in the new Ste. Genevieve Museum Learning Center, guild historian Anna Kirchner began cleaning and restoration, with professional conservation advice from Paul Haner at the St. Louis Art Museum. Due to damage from the original removal and transfer, it has not been possible to restore the entire mural.

“It will look swell in the new museum,” said Sara Menard, a member of the committee for the Museum Learning Center.

The guild’s Fourth Friday Exhibit in August at its new home on the Courthouse Square also featured a portrait by an Italian prisoner of war of Menard’s mother, who worked at Camp Weingarten. Also on display were other preservation efforts by individuals of camp-created art, including a landscape owned by guild vice president Juanita Wyman, photographs from the Vincent Dunker Studio owned by guild member Bill Naeger of Merchant Street Gallery, photographs owned by local historian Eric Sonnicksen, and copies of newly discovered drawings from the Camp’s Italian newsletter called L’Atessa (The Wait) preserved in the Southeast Missouri State University archives by the family of Laura Koetting.

The exhibit also acknowledged restoration efforts undertaken by other community organizations to save art and thus save our history.

In 1935, Ste. Genevieve Catholic Church commissioned the restoration of four historic religious oil paintings. In 1970, the U.S. Postal Service paid to have the WPA mural created in 1942 by Art Colony artist Martyl cleaned and repaired. In the mid-1990s, the Felix Valle House State Historic Site restored two large oil paintings by Matthew E. Ziegler. In 2002, the Woman’s Club of Ste. Genevieve had three of the Ste. Genevieve Art Colony paintings in their possession restored at Szelag Art Conservation in St. Louis.  Szelag was again used by the Bolduc House Museum/Center for French Colonial Life in 2014 to restore a portrait of Jean-Baptiste Pratte.  In 2017 the Foundation for Restoration of Ste. Genevieve also employed Szelag to repair a tear and restore the portrait of Jules Valle by Art Colony co-founder Bernard E. Peters, and more recently, a portrait of Catherine Beauvais, great niece of Jacque Guibourd.

Guild president Carolyn Bach said, “We were pleased with the level of interest in this exhibit, and while we had to take it down because of impending renovations to the new Art Center and Art Museum, this type of local art history display will be a feature of the new facility.”