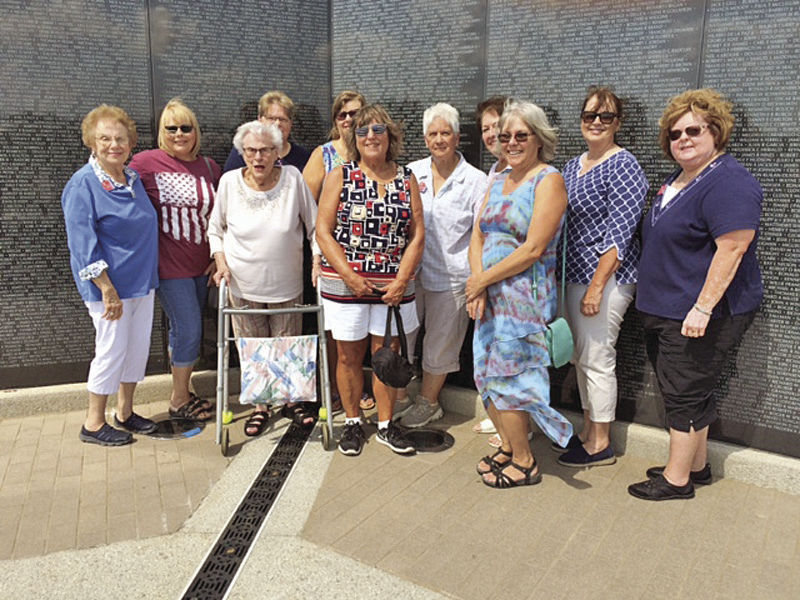 The Hill and Dale Garden Club of Bloomsdale toured Missouri’s National Veterans Memorial in Perryville on September 11, the anniversary of the attacks on America in 2001.

The Vietnam Veterans Memorial Wall in Perryville is a replica of the Vietnam War Memorial wall in Washington, D.C.

Members of the garden club respectfully viewed the 58,276 names that are arranged in order of the date of casualty and alphabetically on a total of 140 panels. All service branches are recognized, including the Army, Marine Corps, Navy, Air Force and Coast Guard. The youngest service member on the wall is 15-year-old Dan Bullock and the oldest is 62-year-old Kenna Taylor.

James Eddelman, a Vietnam veteran from Perryville, donated dozens of acres and a substantial amount of money to make the memorial a reality.

Recently, the club also was inspired by a presentation from Mae Elder, a long-time Hill and Dale Garden Club member and senior prize-winning flower designer.

Elder showed the members how to use various types of receptacles, flowers and greenery to make beautiful arrangements for any occasion.

The club has been sprucing up the three Blue Star Monuments they donated and sponsor in honor of our military service members. The monuments are located in Ste. Genevieve at Highway 61 and Market, in Bloomsdale at the Park Overlook on Highway 61, and on Interstate 55 at the northbound rest stop at mile marker 160.

Next month, the club plans to rededicate the Blue Star Monument at Highway 61 and Market as the previous one had been destroyed by a car accident.

For information about the Hill and Dale Garden Club, call president Delsie Flieg at 573-517-2344.

(Information in a release from the Hill and Dale Garden Club.)