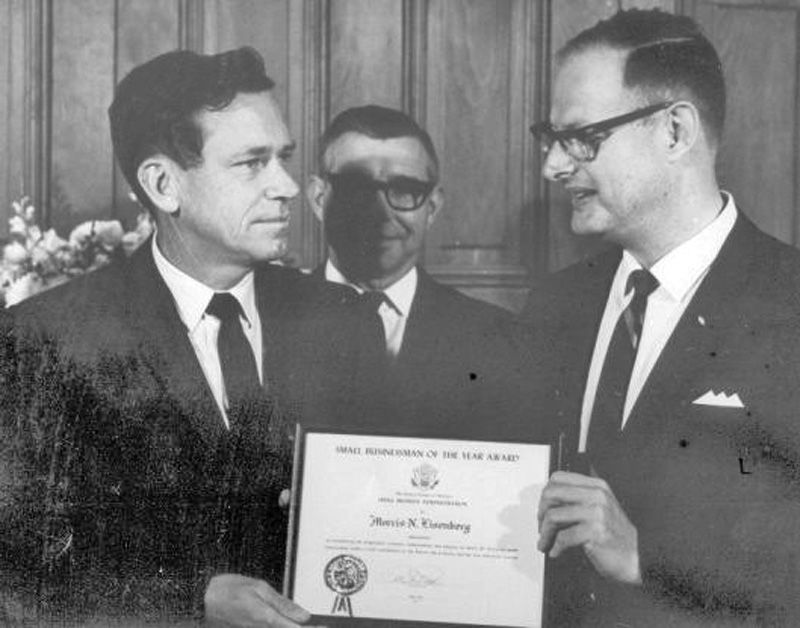 Morris Menachem Eisenberg, of Longwood, Florida, since 1994, died on Friday, August 23, 2019, at Advent Health Altamonte, due to congestive heart failure. He was 96 years old.

He was born on November 24, 1922, in Ellington, Connecticut, a son of Isaac Zvi “Harry” and Tova “Tillie” Eisenberg.

In addition to his parents and his wife, he was preceded in death by one brother, Paul; and two sisters Evelyn and Miriam.

He was a graduate of Rockville (Connecticut) High School where his name is inscribed on its wall of honor.  He was “emcee for life” for his class reunions.

He was born at home on the farm during a blizzard. He attended a one room school house. His first car was a used Model-T.

He founded many businesses, beginning in 1947 with a commercial chicken business in an old piano factory in Troy, New York, and then a housing community there, patterned after the Levittown suburb.

During the Korean war, he and his brother Paul’s “BiltBest” built ammunition boxes. President Harry Truman relocated the factory to Missouri, initially in Clarence and then to Ste. Genevieve when the company outgrew the smaller factory. After the war wound down, he and his brother transformed BiltBest into a wooden window and door manufacturer. BiltBest thrived, employing 350 people at its peak.

He was also an innovator and inventor, awarded numerous United States and Canadian patents. The Small Business Association awarded Eisenberg the Missouri “Small Businessman of the Year award” in 1967, coming in second in the entire nation. In June of 2007, BiltBest celebrated its 60th anniversary “Founder’s Day” weekend with the entire Eisenberg family and past and current employees. In multiple ceremonies, Eisenberg received numerous awards from the U.S. Congress, Missouri Governor and the Missouri State Legislature with multiple commemorative awards and events from Biltbest.

He was a two-term alderman for the city of Clarence, Missouri.  He served as president and on the board of directors for the National Woodworkers Association and on the Ponderosa Pine Woodwork board of directors. PPG honored him by providing all the glass for the home he designed for his family in Ste. Genevieve.

He never met a stranger.  A true believer in Dale Carnegie’s “How to Win Friends and Influence People,” he could mingle with generals and governors as well as waiters and trash collectors. For 30 years, he summered in Quechee, Vermont, playing golf as often as possible. He co-founded Congregation Shir Shalom Synagogue in Woodstock, Vermont, which now has 200 families, with 50 children attending its religious school. His walks around his neighborhood resulted in lengthy stops to talk to neighbors, whom all became friends.

There will be no funeral. A private memorial service will be held at his home in Longwood.

The family requests no flowers be sent, in compliance with Jewish tradition. No charitable contributions have been requested, only condolences.