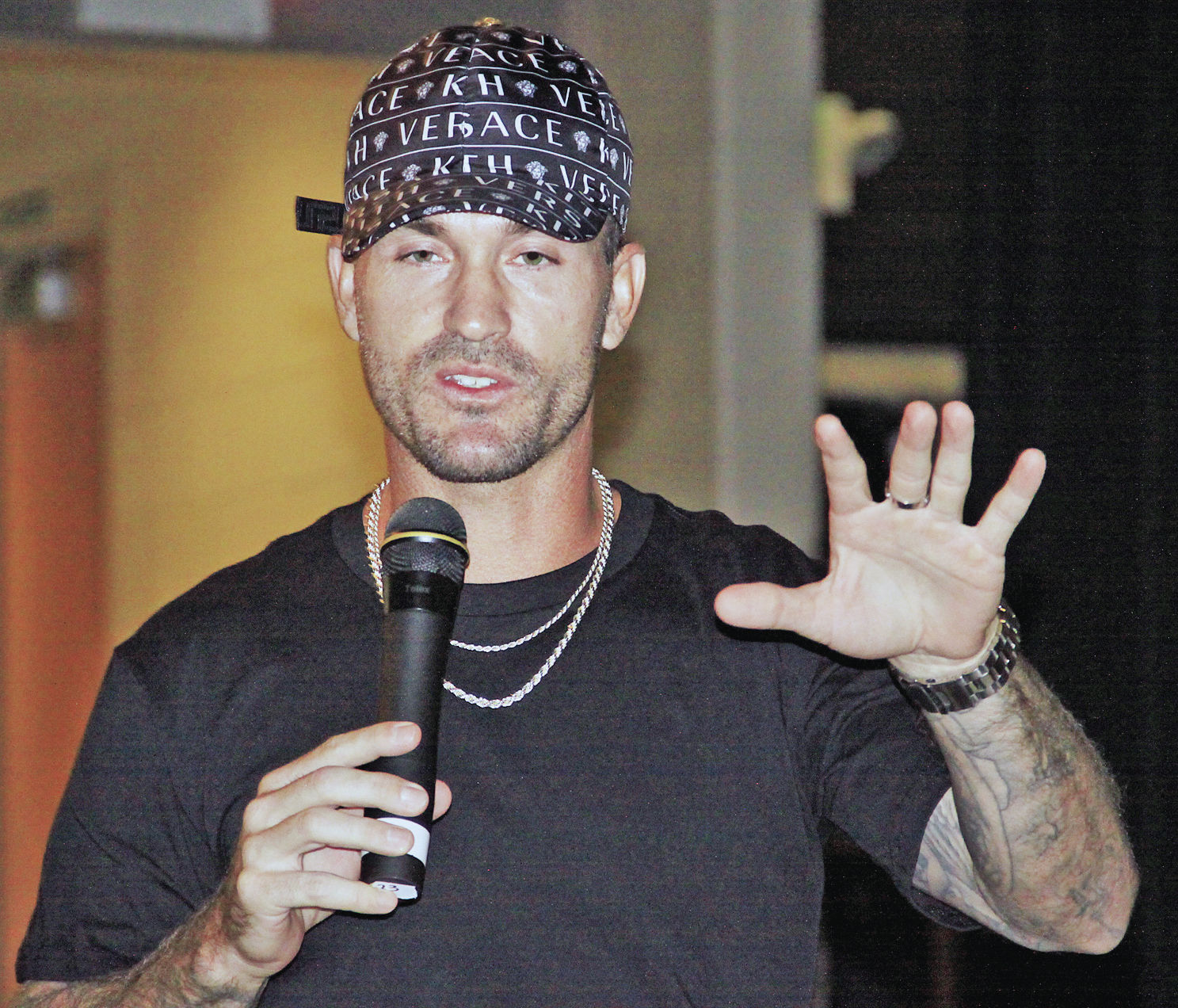 Hoffman, who suffered through years of substance abuse and spent time in prison, began by describing a homeless man lying in a gutter, apparently trying to get water into a syringe to shoot heroin.

Then he asked the audience to visualize the next 10 years of that person’s life.

“My job for the last nine years has been to educate people and let them know that whatever beliefs you have in life, you were not born with that,” Hoffman said. “It was taught to you.”

This includes preconceived notions of what types of people become drug addicts. Toward the end of his presentation, Hoffman revealed that he had been that homeless person in the gutter, during the depth of his addiction.

Raised in an upper middle class family with educated parents in central California, Hoffman did not fit the stereotype of a likely addict. Despite a lack of height, he was a star basketball player in middle school, with dreams of playing pro basketball. He obtained marijuana to impress a girl, he said, and got kicked out of school, effectively ending his basketball dreams.

Hoffman then got into BMX dirt bike racing and found that he excelled at it even more than basketball. He was making money, getting endorsements from shoe and sunglass companies and earning wide acclaim while still in high school.

Yet, Hoffman said, he didn’t want to live.

His problems had begun when his father stopped attending his basketball games. Feeling he was “not good enough” to win his father’s approval, Hoffman began having increasing social anxiety.

He didn’t know it at the time, but there was also a history of addiction issues on his dad’s side of the family. …

Buried issues like his, Hoffman stressed, are one of the root causes of addiction. In his own situation, with his social anxiety, depression and genetic history of addiction, he was a prime candidate for addiction, without realizing it.

Once he started experimenting with marijuana, Hoffman said, his fate was sealed.

Hoffman is convinced some people have the potential of addiction baked into their DNA, while others do not.

“When I tell people weed is a gateway drug, I’m not telling you that if you smoke weed, you’re going to end up on heroin,” Hoffman said. “I’m telling you this: If you smoke weed, you don’t get to choose whether you’re going to be a drug addict. It doesn’t matter how much willpower you think you have; it doesn’t matter how much money your parents may have; it doesn’t matter what color skin you have or what side of town you came from. If you’re an addict, you’ll find out after you walk through the door. You walk through the door, you roll the dice. I didn’t know this at 18 years old. My brother and I were two completely different people, because I got the addiction component.”

See complete story in the September 4 edition of the Herald.