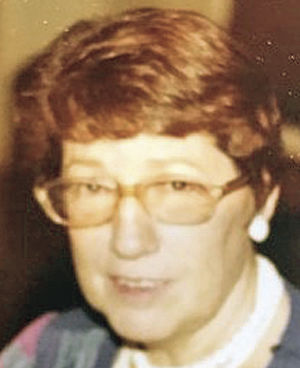 Frances Jane Rozier of Chesterfield died of natural causes on Sunday, August 18, 2019, at her home. She was 96 years old.

She was born October 27, 1922, in Cape Girardeau, the youngest daughter of the late Francis James Rozier and Barbara Haefner Rozier, of the Rozier Bank in Ste. Genevieve.

She is survived by her two nephews, Louis James Sharp IV and his wife Pattiann Dangler Sharp; Francis Rozier Sharp and his wife Jane Power Sharp; and their five children and 12 grandchildren.

In addition to her parents, she was preceded in death by her two sisters, Mary Elizabeth (Rozier) Sharp, who died in 1991; and Zoe Estella (Rozier) Houk, who died in 2001.

She attended primary schools in Ste Genevieve and thereafter Villa Duchesne Academy in St. Louis; Stephens College in Columbia, Missouri; and Washington University School of Fine Arts in St. Louis. She spent her career as an artist and partner in Centaur Studios, a commercial art studio in St. Louis until her retirement in the 1970s.

She remained active, alert and interested in life and family to the very end. Independent and single her whole life, she was also an avid collector of fine art during her long retirement and played tennis into her late 70s.

Funeral services will be 10 a.m. on Saturday, September 14, at Incarnate Word Catholic Church in Chesterfield, followed by burial services on the same day at Valle Spring Cemetery in Ste. Genevieve.

Memorial donations may be made to the charity of the donor’s choice.