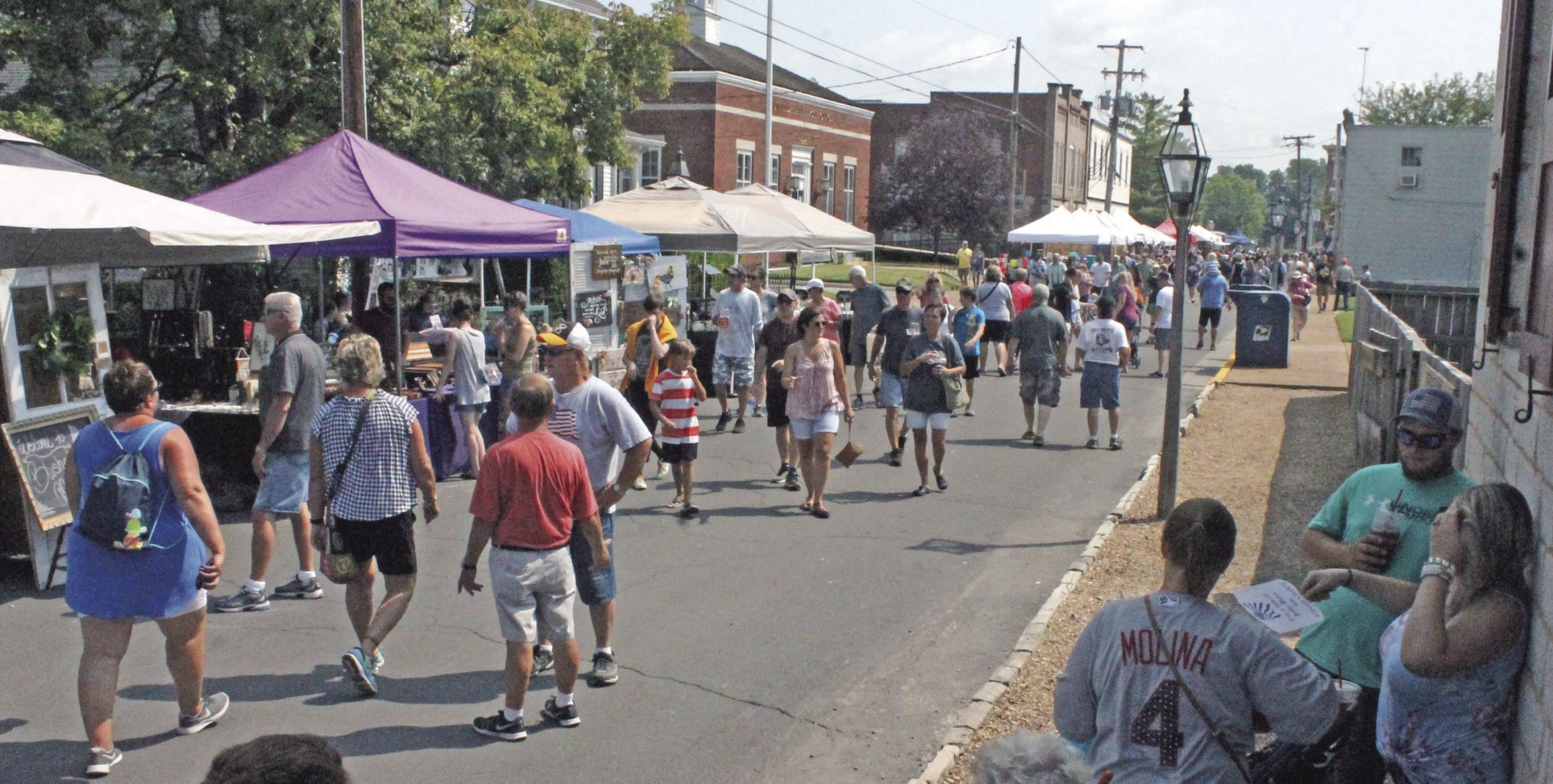 Heading into the festival, the summer has been relatively mild.

“Hopefully the weather will be like it was this week and last week,” Inman said last week. “I’m confident it will be a success.”

The basic formula of food, music, crafts and music will continue.

A total of 26 food and alcohol vendors will be on hand, along with at least 150 crafters. Inman said she anticipates additional crafters signing on before the start of the festival.

A blacksmith and a chainsaw artist will be on hand, as well.

A blacksmith used to come, but did not last year. Inman is glad to have a “smithy” back, demonstrating the lost art.

“We’re excited to have him,” she said.

The Knights of Columbus also return with their kabobs, after skipping a year.

“We’ve got some new food vendors,” Inman said. “We’ve got a lady who has different flavored macaroons, and we also have a pizza vendor this year. The Knights of Columbus have come back this year with their kabobs. They decided not to come back last year. They weren’t going to come anymore, but I guess they’ve got some help now and they’re coming back.”

There will be five areas with music and beer: Lions Park, Moses Austin Park, Main Street at the Eagles Lodge concession, plus the corners of Merchant and Second and Main and Jefferson.

Each music venue will have seating.

Duck races, another old favorite, will again take place on the South Gabouri Creek. Tickets will be available that weekend under the railroad trestle.

A new addition to the weekend this year will be the carnival at the Ste. Genevieve County Fairgrounds.

The county fair organizers were unable to get the ride company in for fair weekend last month but made arrangements for this weekend. Hours will be 4 to 11 p.m. on Friday, noon to 11 p.m. on Saturday and 11 a.m. to close on Sunday. [Presale tickets are available at Rozier’s Country Mart through Thursday.]

Not far from the carnival setup, over in Pere Marquette Park, the annual 5-kilometer run start off Saturday morning. Registration is at 7 a.m. for the run, which heads toward downtown before turning back up Fourth Street and Maxwell Hill.

Things kick off downtown with the opening ceremony at 10:30 a.m., Saturday at the Welcome Center. It will feature live music by Les Petits Chanteurs and the Ste. Genevieve German Band. Rosie Hughey will sing the National Anthem. Bill Naeger will again be the master of ceremonies.

Project Pioneer families — Misplay, Schmelzle and Schmidt — will be recognized during the ceremony.

The World Bird Sanctuary will be back for one final festival.

“They’re not going to go to small festivals like this anymore,” Inman said, “so this will be the last year that the World Bird Sanctuary is at Jour de Fete.”

On Saturday, Hope Church will have a bouncy house and games free for children on the Moses Austin/Jour de Fete property.

There will be plenty for adults to do as well.

The Ste. Genevieve Gear Headz Car Club will have a car show at the Knights of Columbus Hall on Sunday.

New France: The Other Colonial America will have its Centre For French Colonial Life open both days, with an admission fee. Tours will be offered for the Bolduc and Bolduc-LaMeilleur houses at 11 a.m. and 2 p.m. on Saturday.

Inman thinks the wide variety of activities and merchandise should offer everyone something to enjoy.

Parking will again be provided at Eric Scott Leathers, with shuttles to bring people into the downtown area. Drop-off points will be US Bank at Fourth and Market and the pedesrtian bridge by the Moses Austin Park.

(Information from a telephone interview with Jami Inman, from text communications with Donna Rausch and Geoff Giglierano, and a flier for the carnival at the fairgrounds.)