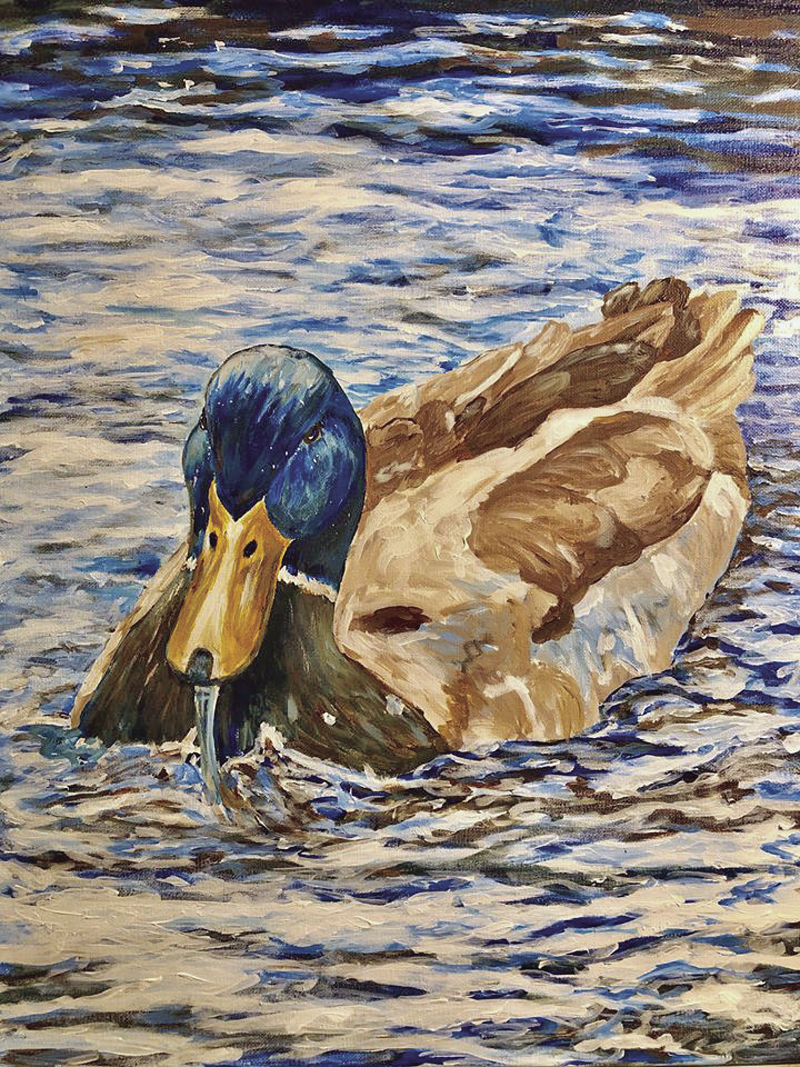 This month’s Fourth Friday Art Walk was setting up as a lead-in to a Chalk Art Festival on Saturday in downtown Ste. Genevieve.

The threat of rain has postponed the outdoors chalk art event to Saturday, July 27.

But the Fourth Friday Art Walk series, in its 11th year, will continue this week [June 28] and offer a sneak peak of next month’s festival.

Craig Thomas, who was to be featured during the art walk, will have a solo show Friday night in the Merchant Street Gallery.

The Fourth Friday Art Walk will feature art at downtown galleries and art spaces from 6 to 9 p.m.

This special exhibit of her acrylic and watercolor paintings follows her love of one place in particular, affectionately known as “Kaskie.”

“I’m so inspired by the breathtaking vistas of Kaskaskia Island that I enjoy from my home on the cliff in St. Mary,” Thompson said.

Her art includes not only some of those vistas, but closeups of some of the wildlife that have endured the recent floods. A blue heron and dragonfly soar overhead, while a mallard duck and frog make the best of the water.

Thompson’s faith is reflected in several watercolors of the church and rectory at Kaskaskia.

Thompson’s family has deep roots in the area.

Thompson has always loved to draw and paint, and is predominantly self-taught. Her first art instructor was Winnie Frentzel of Perryville, from whom she learned the use of multiple mediums and was encouraged to pursue art.

Although she has lived elsewhere in pursuit of a career in business, St. Mary has always been home. And when she came back home in 2017, Thompson became a member of the Ste. Genevieve Art Guild.

“I enjoy being a member of an active art group that influences me to be more creative,” she said.

Thompson will be on hand to greet visitors on Fourth Friday, and her exhibit will remain at the Winery through July. She also has work on display at the Lewsi Winery on North Main Street.

Local author Mark Evans will have a special book-signing in conjunction with Fourth Friday Art Walk in the Matthew Ziegler Studio behind the Shaw House at Merchant and Second streets.

Marc and Kristen Chibitty and family will be part of the event, putting on a short skit they collaborated with Evans on, featuring final colonial commandant Jean Baptiste Valle and other historical characters.

The short skit Friday will be presented up to three times during the three-hour time slot, depending on the attendance.

The book takes a block by block look at about 90 of the town’s most historic buildings. The sections are wrapped together by a fictitious narrative in which 89-year-old Jean Baptiste Valle, the last colonial commandant of Ste Genevieve, reflects on the changes he has lived through, as he takes one final carriage ride around town shortly before his death in August 1849.

The second edition includes updated information on several buildings that have underwent extensive restorations since 2001 and also adds a few buildings not included in the first edition.

An up-to-date listing of all the exhibits is posted at SteGenArtWalk.blogspot.com, but some of June’s highlights include:

— Pieces from the Herald Collection will be on display at the Centre for French Colonial Life on Market Street. In addition to Ste. Genevieve scenes that have been recently added to the collection, some works collected by previous owner Janet Mace also will be shown, including three original illustrations by pen-and-ink artist Michael Halbert.

— The Hands on History House [Linden House] features Bob Hanby of Hanby Art offering caricatures, plus an acoustic guitar jam session on the side porch with local musicians.

— E-Klek-TiX will feature “All Creatures Great & Small,” a tribute to the animal kingdom — new art by J Rissover. Those who bring their well-behaved pets can get a special treat, while mimosa tasting will be offered for adults, along with old jazz and conversation.

— Sassafras Creek Originals has a number of artisan works created in the early American, colonial tradition.

The Gallery Association of Ste. Genevieve invites merchants, which are not traditional art spaces, to be involved and promoted on any future monthly Art Walk. For more information, contact the association by email at artwalkstegen@gmail.com.