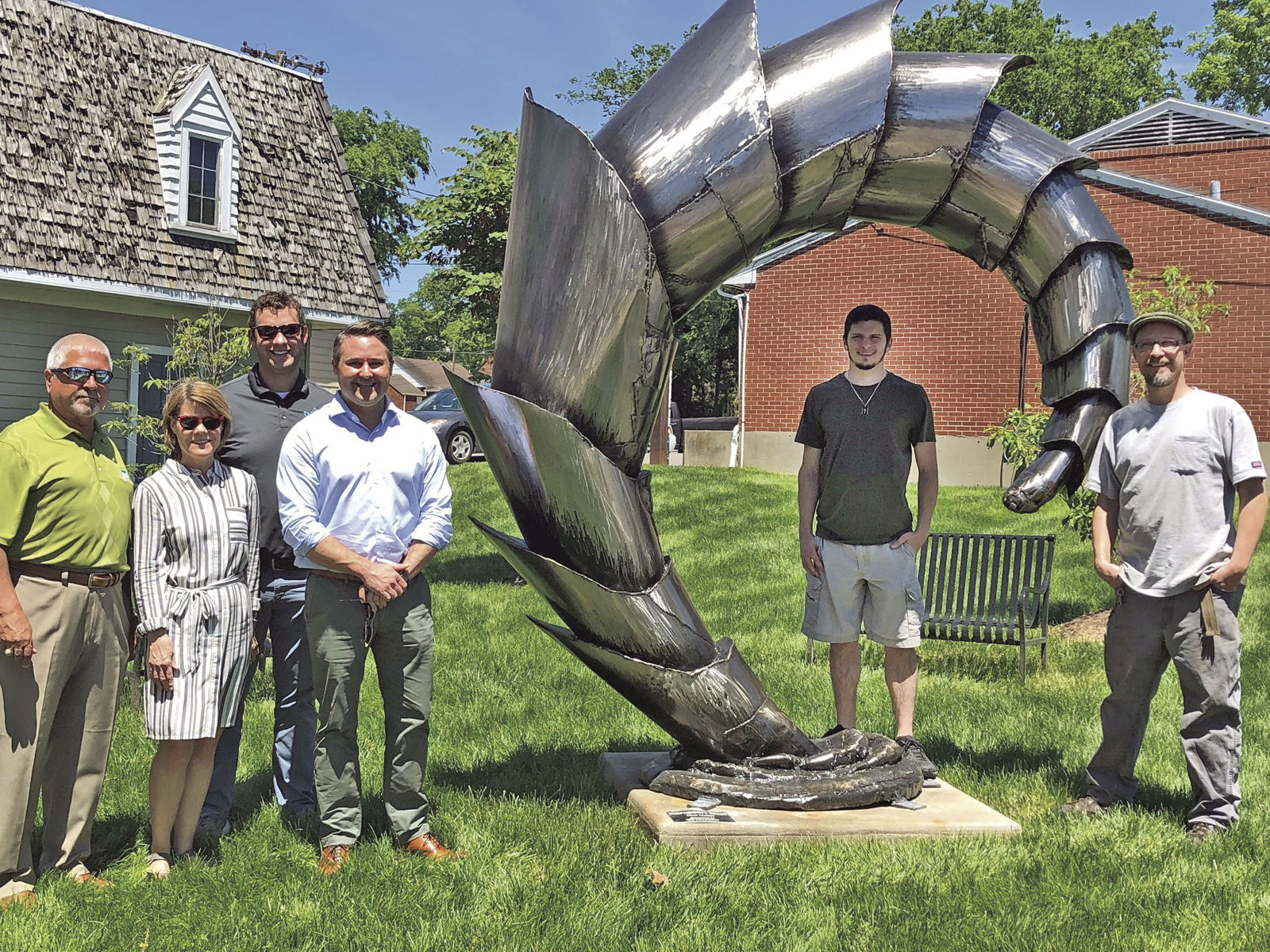 The unveiling took place in the Student Art Garden at the corner of Broadway and Sprigg streets, next to Broadway Pharmacy at 710 Broadway.

Hurst, of St. Mary, received a competitive grant from Broadway Pharmacy to fabricate the outdoor sculpture designed to serve as an inspirational focal point for the Student Art Garden.

Hurst is a senior pursuing a bachelor of fine arts in digital art at Southeast Missouri State. He plans to graduate in May 2020.

“Thank you for the opportunity to build this,” said Hurst, who completed a welding workshop a year ago that spurred his interest in sculpture.

Last fall, he submitted two designs to be considered for the garden, and his “Pangolin Curl” was selected as part of a grant proposal. The grant award provided him with $500 to begin crafting the piece, which he started in January, working in earnest five days a week to see it to completion.

“This is an amazing opportunity to have,” Hurst said, as well-wishers gathered around his finished product.

Chris Wubbena, Southeast’s professor of sculpture, said the Student Art Garden at Broadway Pharmacy is a wonderful opportunity for Southeast art students to showcase their sculptures.

“I am very proud to say we do this in Cape Girardeau,” he said.

Wubbena hopes the concept might catch on in other communities as well.

He thanked Broadway Pharmacy for creating the Student Art Garden.

“It is such great exposure for young artists,” he said. “When we are able to give them these resources, it’s great to see what they can do.

“Nick has done an amazing job,” Wubbena added. “I have never seen anyone take to welding and metal fabrication like he has.”

Hurst’s 450-pound metal sculpture Pangolin Curl, was influenced by an endangered species in Africa called the Pangolin. The unique design of the Pangolin’s scales inspired Hurst to replicate them in this sculpture.

In the wild, Pangolins are often hunted and poached in parts of Africa, especially for their scales and meat, he said. They are an animal closely related to armadillos and possums, and they have a similar defense mechanism, which is also their greatest weakness. When a Pangolin gets frightened, it rolls up into a ball, making them extremely easy to catch by poachers, Hurst said. The sculpture’s curl represents this mechanism, he said.

“The Pangolin uses its scales as armor, and I wanted to communicate that relationship, similar to how we as humans instinctively seek mental and physical protection,” he said.

Hurst built the sculpture using five and half sheets of cold-rolled steel and scrap metal. The mill scale was ground down and airbrushed to create a dark-to-chrome faded look.

The sculpture stands nearly 10 feet tall with a base four feet in diameter.

“Each day, the piece grew in a certain way,” Hurst said, “whether it was a new realization of what the sculpture could mean in the viewer’s eyes or how I gained knowledge in creating large-scale, sculptural, artwork. I’m happy the way things have turned out.”

The Student Art Garden was established in 2015. Broadway Pharmacy owner Lee Schlitt says the pharmacy collaborated with Southeast Missouri State University and the City of Cape Girardeau to establish a green space that downtown visitors, students, residents and the workforce can enjoy.

“We are big supporters of downtown,” said Schlitt, who said his business is happy to collaborate with the University and Old Town Cape to make the garden a reality.

The Student Art Garden is a nice way to showcase student talent in the downtown area and especially at this high-trafficked intersection, Schlitt said.

Pieces remain on display in the garden for a year before they are moved to Southeast’s River Campus.

(Information in a release from Southeast Missouri State University.)