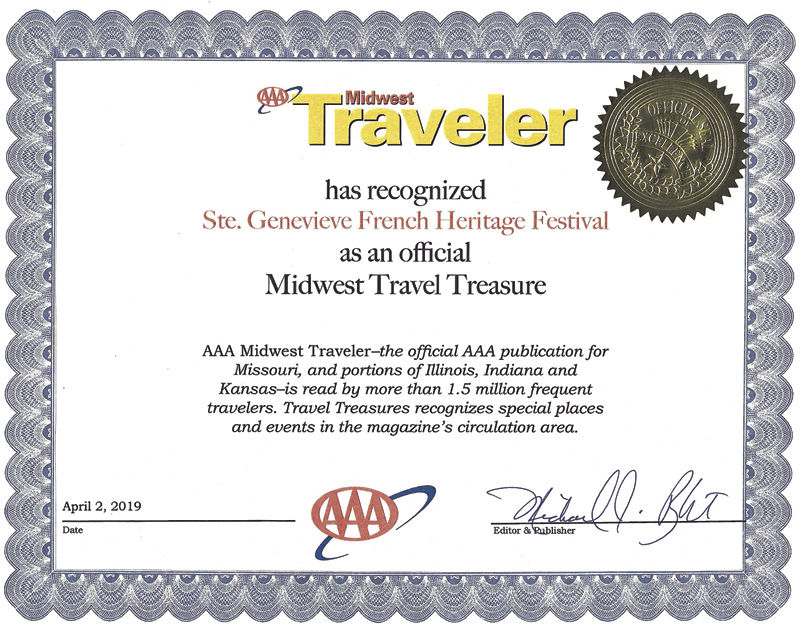 Familiar faces will return for the annual French Heritage Festival on June 8, while new ones will be added.

The festival, meanwhile, has received a special honor. It was recently designated by AAA’s Midwest Traveler magazine as “an official Midwest Travel Treasure.” The official AAA publication for Missouri and portions of Illinois, Indiana and Kansas reaches about 1.5 million readers.

“We were really excited,” said Cathy Grusling, who has served as co-coordinator of the event in recent years along with tourism director Sandra Cabot.

She praised Cabot for her work in promoting the town, despite grumbling within the city government about the taxpayer funding of tourism.

“They pick on her for tourism; they just don’t know how much she’s doing,” Grusling said.

This year, in addition to popular French Creole musician Dennis  Stroughmatt, some musicians who have appeared in town before will also be in this year’s lineup. Jerry Huggins will perform jazz music on the clarinet and saxophone, while Dr. Isaac Lausell of the University of Illinois-Carbondale will bring his French jazz trio.

Stroughmatt will be in Lions Park from 7 to 10:30 p.m. before closing the event with a promenade.