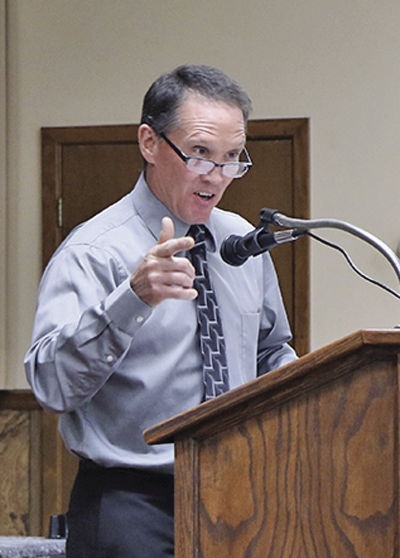 At this year’s event, junior Bryce Trollinger began the festivities by playing a musical piece on his trumpet: “The Maid of the Mist,” by Herbert L. Clarke.

The guest speaker for the evening was Chris Werner, a retired Ste. Genevieve High School teacher and coach. Werner graduated from Ste. Genevieve High School in 1984. He taught mathematics classes at the high school for 29 years and coached football, wrestling, cross country and track during that time, along with sponsoring several extracurricular activities. He spoke to the students on the importance of maintaining a focus on their goals, no matter which path they decided to take after high school.

A presentation was made by Tyson Schaffner with the Patched Overalls Experience, a project that offers one student each year the opportunity to fulfill a dream experience between their junior and senior years. He introduced senior Emma Flieg, the recipient of the 2018 Patched Overalls Award for the Class of 2019. She shared the story of her journey to a small town near Port Elizabeth, South Africa, where she spent three weeks volunteering at African Dawn Wildlife Sanctuary, an experience that she says helped to shape her future.

Each year at the banquet, the students in the top 10 percent of each class are recognized. Following the class honors, one student is awarded for his or her performance for each course offered at the high school.

In addition, senior Abbey Engelmann was also recognized as Cadet Teacher of the Year.

Following the annual awards, senior Danielle Naeger was recognized with a certificate for Outstanding Service from Craig Hayden, director of the Perryville Area Career and Technical Center (PACTC), for acting quickly, calmly and professionally in an emergency. Naeger is enrolled in the health occupations program at the PACTC. On March 29, a student began to have a seizure on the bus that transports the students to Perryville for classes. Without hesitation, Danielle jumped into action and began to administer first aid to the student. It was through her quick thinking, skills and support that allowed the bus driver and another teacher to act accordingly in handling the situation. Naeger stayed with the student until the medics arrived, and even then, she was able to offer a hand.

Each of the following students (listed alphabetically by surname) earned a medal for outstanding academic achievement in his or her individual class: