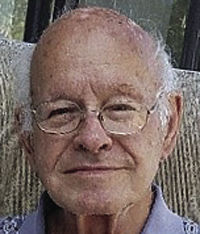 He is survived by one daughter, Mary, and two grandsons, Ben and Aaron, of Ann Arbor, Michigan; one son, John of St. Louis; and many nieces and nephews.

He was a dear father, grandfather, uncle and friend.

Following service in the U.S. Navy, he graduated from St. Louis University in January 1951. He began his career with Monsanto as an accountant. He retired 35 years later as a computer systems analyst, having been introduced to the world of computers when Monsanto acquired one of the very first IBM computer installments in its accounting department.

After retiring in 1986, he and his wife moved to Sanibel, Florida. He became an active volunteer at the J. N. “Ding” Darling National Wildlife Refuge and was very proud to reach 30 years of service in 2016. He was a member of the board of directors of the “Ding” Darling  Wildlife Society from 1994 to 2003, serving as membership chairman. In addition to volunteering at the refuge, he was active at St. Isabel Church serving as a Eucharistic minister.