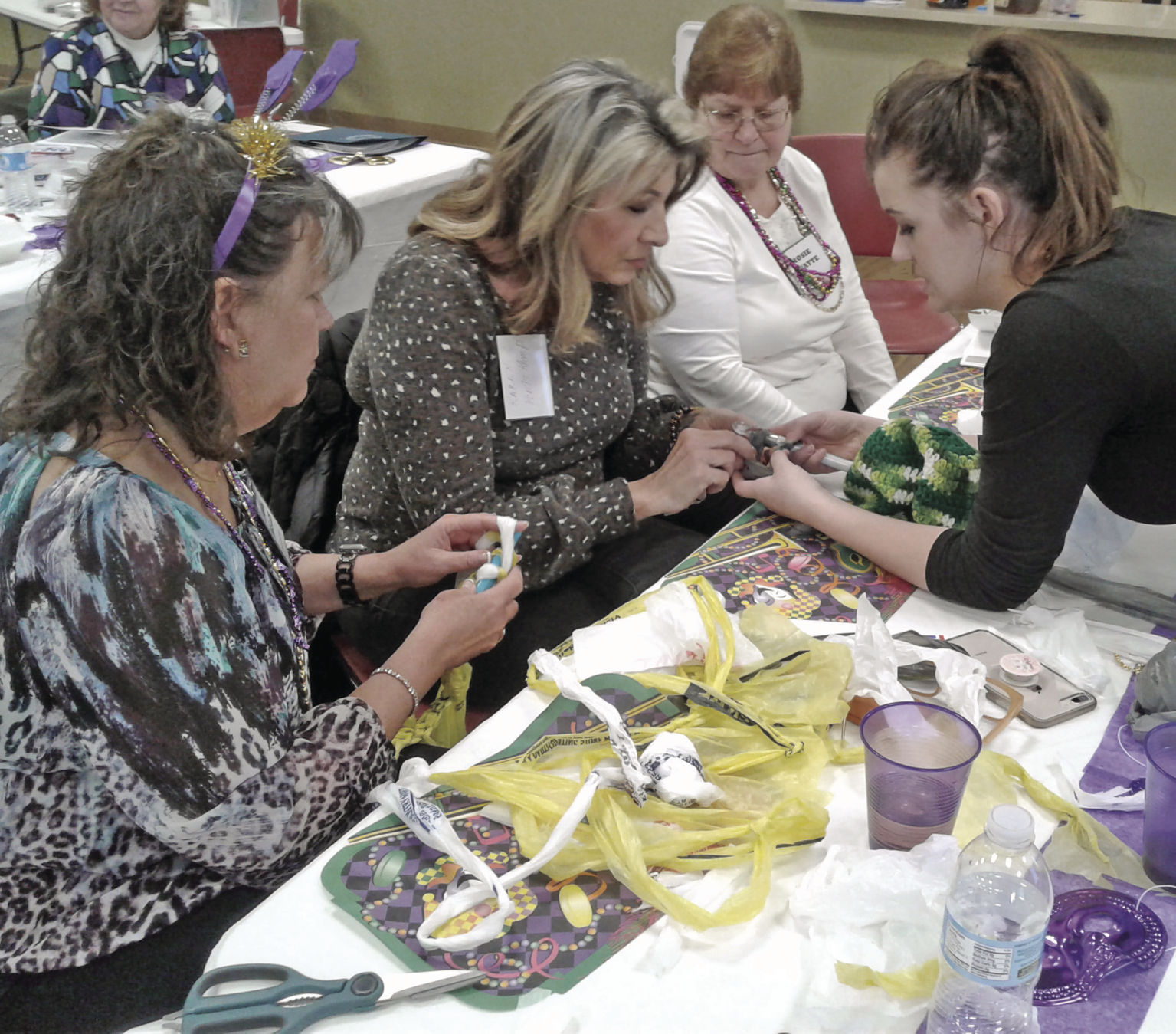 In keeping with the Mardi Gras theme of the February meeting of the Ste. Genevieve Woman’s Club, the four dozen members attending were treated to a return visit by the “Blues Sisters,” whose talents rival those of their Hollywood counterparts.

Judy Gustafson, Rose Hughey, Gloria Means, Georgia Honermann and Diane Miller — with assistance from Diane’s two rhythmic granddaughters — brought a swinging brass ensemble to entertain the club. The audience quickly joined in karaoke-style to the canned music from the  “Sisters.”

The meeting room at the new Progress Sports Complex at the Ste. Genevieve County Community Center was filled to capacity for the meeting.

Along the back wall were stacks of plastic bags full of … more plastic bags. They became the raw material for crocheting mats and blankets for the homeless.  The connection wasn’t obvious at first, but once Joy Kamp and her daughter Kathy began explaining the project, it all made perfect sense. The bags can’t be put in our public recycling system; they gum up the sorting machines. But by cutting them into strips and tying those strips together into a ball of plastic yarn that Joy Kamp calls “plarn,” then crocheting that with a large crochet hook into wide patterns, the bags create a mat or blanket that is warm, waterproof, porous and lightweight. Joy Kamp even adds a pocket on the end to store clothes and belongings which can double as a pillow.

Joy Kamp is a busy woman already, but she can’t stop making the mats after hearing so many touching stories about how they helped homeless people in St. Louis survive on the streets. It takes 600 bags and about a month to make each blanket, but she just can’t stop.

Those who would like to help, even if it’s just cutting plastic bags into “plarn,” cab contact her by email at Kraftymom85@hotmail.com or on Facebook  at “The Savvy Krafters.”

The Ste. Genevieve Woman’s Club will be hosting the GFWC Ninth District Spring Convention on April 13 at Hotel Audubon Grill and Bar. Plans are underway to welcome the delegates from the other clubs in the district to this important regional gathering.

The next meeting of the GFWC Woman’s Club of Ste. Genevieve is March 18 at the First Baptist Church of Ste. Genevieve. The guest speaker will be Lisa Page, Appellate Judge for the Missouri Court of Appeals, Eastern District. She will talk on “judicial decision making.”

The General Federation of Women’s Club and the Woman’s Club of Ste. Genevieve is dedicated to strengthening their community and enhancing the lives of others through volunteer service. They help to create change by supporting the arts, preserving historical and natural resources and advancing education through scholarships.