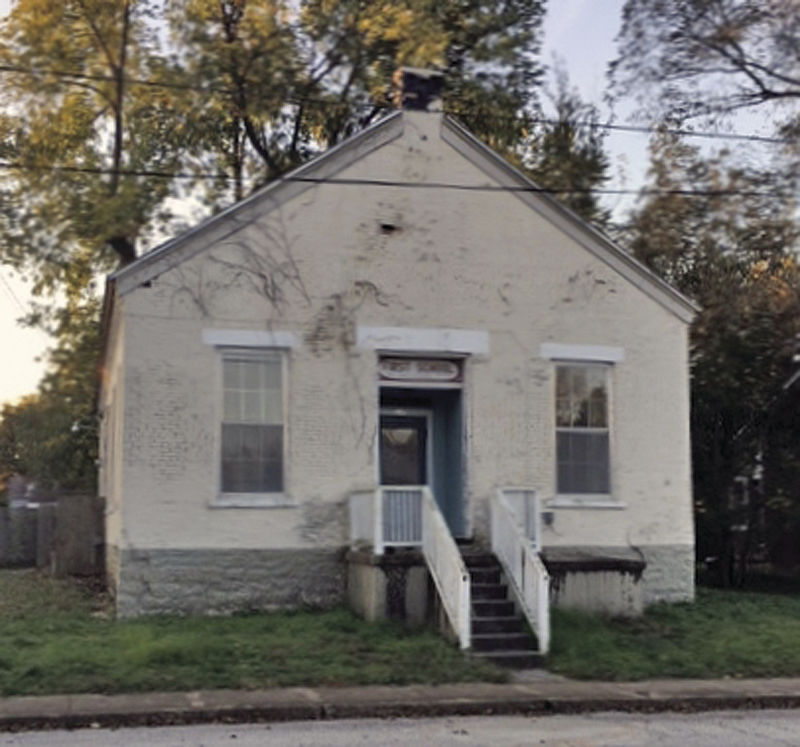 One often hears that the First School building, located at 126 Washington St., was the first African American school in Ste. Genevieve.

However — based on research of newspaper articles, Board of Education minutes, and deeds — this circa 1855 structure was the first to be used specifically as a public-school house. Previously, the public school had been held in rented property on the corner of Second and South Gabouri streets. The land on which the First School building is located had been deeded to the city by Ferdinand and Constance Rozier on October 11, 1851, with the stipulation that the property be used for a market house and other public buildings that the city deemed necessary. On September 6, 1855, the city deeded the property to the School Directors of the Town of Ste. Genevieve. The First School building was constructed for use as a school by the city’s Caucasian children.

In 1874, the board decided to build a new school house, which eventually became located at the old John Scott property on the southeast corner of Second and Market. A two-story brick building was completed and public-school students began classes there on October 16, 1876.

On February 9, 1867, the Board had approved Mr. John K. Smith to conduct a school for African American students. Classes began on February 11, 1867, Newspaper accounts from the early 1870s indicate that the rented building was very dilapidated and in need of major repairs, a condition which most likely initiated the move to the First School building.

In 1888, the board hired David W. Anthony as teacher at the African American school.

Mr. Anthony was a recent graduate of the Lincoln Institute located in Jefferson City. He taught at the First School building from 1888 until 1901, when he took a position at the St. Louis Post Office. Mrs. Anthony conducted the school for the next three years and then moved to St. Louis. Mr. Anthony was very active with his college, as he chaired a committee to rebuild the campus library after a disastrous fire. He also conducted numerous Teacher’s Institutes in Southeast Missouri and was active in the Ste. Genevieve Republican organizations.

The First School building was used by African American students enrolled in grades 1 through 8. Upon graduation from school, some students attended the Festus Douglass Cooperative High School, which had opened 1928 as a two-year high school.  In 1939, it became a regional African American high school. Students from Ste. Genevieve and St. Mary traveled to Festus daily via public transportation paid for by the student and reimbursed by the school district. Students left at 5:30 a.m. and returned about 5:15 p.m.

In May 1955, the last students attended this African American school in Ste. Genevieve.

The building was sold on October 25, 1955, to the United Glass and Ceramic Workers Union, which used it as a union hall until 1980. Various other people owned the building over the next 36 years. For a number of years, it was operated as children’s daycare center. In September 2016, the building was sold to Jennifer “Olive” Kraus, who operates a specialty antique store there.

One other African American school existed within the city limits of Ste. Genevieve. The local newspapers reported on September 10, 1898, that the Sisters of St. Joseph had opened a school for African American children so they could receive a Catholic education. Little is known about the duration of this school’s existence but evidence indicates that it existed for at least two years.

Two African American schools existed in the county. One, at Coffman, was in existence as early as 1883 with Ms. Eliza Carter as the teacher. Henry Lee was the teacher there in 1894.  The closure date is yet to be identified.

An African American school was formed by Immaculate Conception Parish in St. Mary during the 1919-20 school year. Later, the school became known as the Lincoln School. A. Mrs. Coffman, Mrs. Hickman, Mr. Morris, and Mrs. Brantley were among the teachers who taught at the school. The St. Mary Lincoln School closed in 1955 as a result of desegregation.

These schools are an integral part of the African American heritage in Ste. Genevieve City and County. They existed during a difficult time in our nation’s history and are a testimonial to the desire of African Americans to educate themselves despite these difficulties. They are remembered as part of the Black History Month currently being celebrated.

(Robert Mueller is a local historian.)

One-Year COVID Anniversary Cause For Reflection

Many Others Deserve Praise For Work In Boosting Town

Letter To The Editor: It’s Time To Expand Medicaid