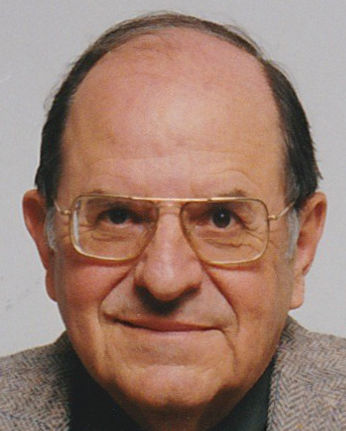 Lewis C. Vollmar of Ste. Genevieve died on Thursday, January 3, 2019. He was 94 years old.
He was born in July of 1924 in St. Louis, son of Joseph E. Vollmar and Rhea L. Vollmar.
He was married to Olive C. Sears in 1946, and they remained married for 67 years until her death in 2013.
He is survived by two daughters, Linda Vollmar of Ste. Genevieve, Victoria Vollmar of Ste. Genevieve; one son, Dr. Lewis Vollmar Jr. of St. Louis; six grandchildren, Graham and his wife Jill, Edward, Joseph, Nicholas, Andrew and Sarah; and 10 great-grandchildren.
In addition to his parents and wife, he was preceded in death by one son, Scott Vollmar; and one brother, Joseph Vollmar, Jr.
He was co-founder, vice president and treasurer of the Vollmar Brothers Construction Company from 1946 until liquidation of the company in 1980. After moving from St. Louis to Ste. Genevieve County in 1975, he became actively involved in the Ste. Genevieve Society for Preservation, serving on the board of directors. He was also a consulting engineer on several projects for the city and county of Ste. Genevieve including the Ste. Genevieve County jail and the community center.
He had a variety of interests that he pursued during his lifetime, including building two experimental aircraft, keeping bees, making maple syrup and molasses, building furniture, building and repairing clocks, operating a ham radio, doing lapidary work and silversmithing to name a few. He was also a great lover of animals.
He was a friend to many and he maintained those friendships throughout his life. He will be missed by all.
Visitation will be 1 p.m. on Saturday, January 12, at Mahn’s Twin City Chapel in Festus. A memorial service will follow at 2 p.m., followed by a private burial. A life celebration will take place from 4 to 6 p.m. Saturday, January 12, at the Kozy Kitchen, 710 Highway 61, Bloomsdale.
Memorials may be made to Serenity HospiceCare or an animal shelter of your choice.